Whether you already live there or not, a visit to the UK is highly recommended. People from other countries love the UK, and in our humble opinion, the inhabitants of these beautiful isles often do not realise the beauty that lies just beyond their doorstep! There is much to see and do. If the rugged outdoors and mountains are your thing, Wales and Scotland offer fantastic hiking holidays. Plus, culture and history enthusiasts can spend hours roaming centuries-old castles and mediaeval towns and cities. Here are a few of our tips for what to see in the UK. 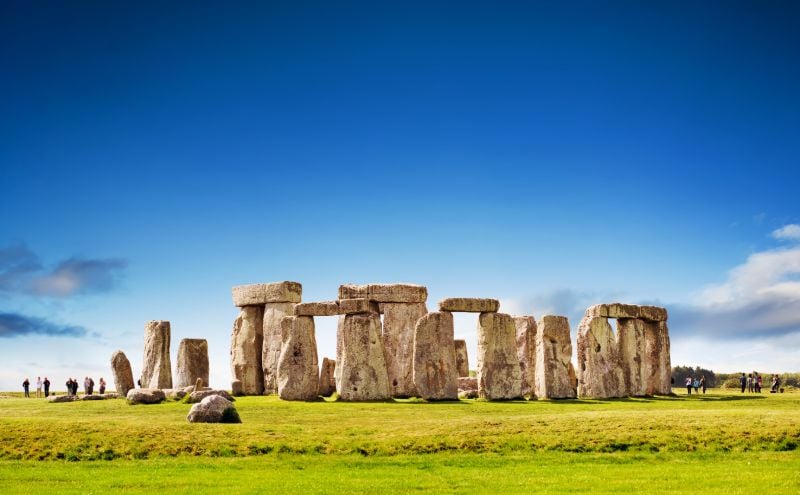 The mysterious Stonehenge is one of the most well known attractions in England.

Stonehenge is without doubt England’s most famous monument. This impressive prehistoric structure consists of a number of enormous stones arranged in a circle – no mean feat considering that the stones weigh at least 25 tonnes apiece! Tens of thousands of people visit Stonehenge every summer to celebrate the summer solstice. No one knows exactly what the mysterious stone circle was built for, but whatever the reason, it was important enough for the stones to remain in place 1000 years later.

Visiting Stonehenge: Stonehenge is close to the village of Amesbury, itself around two hours’ driving from London. A visit to Stonehenge costs around £20, which allows you to walk around the monument and view the exhibition in the visitor’s centre. You cannot walk between the stones themselves. 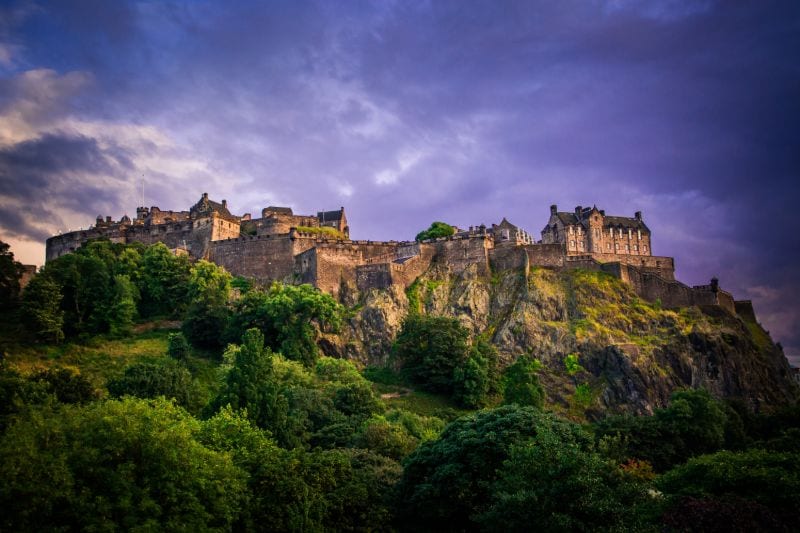 Make sure to visit Edinburgh Castle if you’re camping in Scotland.

Edinburgh Castle is an imposing sight over the city of Edinburgh, high up on Castle Rock, and is one of the city’s most recognisable attractions. The castle has a lengthy history – it was where the Scottish government first met in 1140 and went on to play an important role for many centuries. Visit the impressive ‘Great Hall’ and imagine the lavish banquets that would once have taken place there. Or watch the unusual ritual known as the Changing of the Guard. 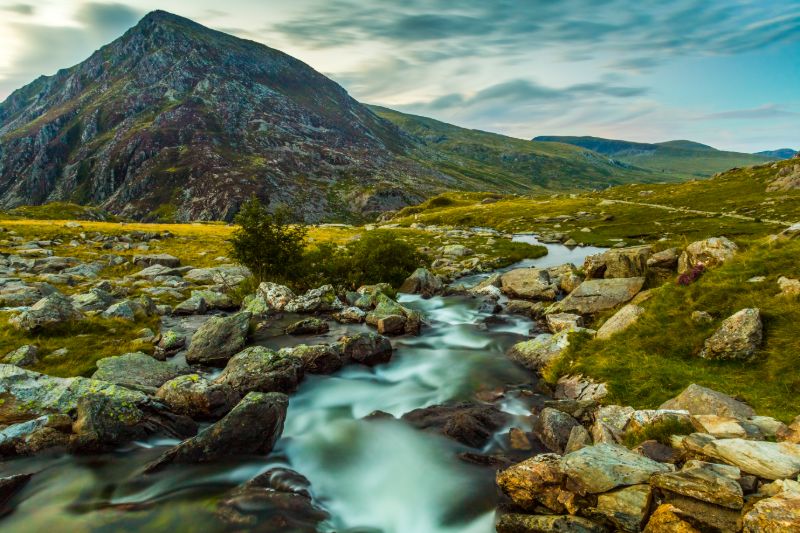 The Snowdonia National Park is a fantastic place for hiking and mountain biking.

Wales is home to one of the highest mountains in the UK – Mount Snowdon, at 1,085 metres, which lends its name to the vast Snowdonia National Park. It’s the ideal destination for hikers, who can walk thousands of kilometres of public footpaths. The National Park also boasts more than 35 beaches and the long-distance footpath known as the Wales Coastal Path.

Visiting the Snowdonia National Park: Some campsites in this area are in very rural locations, which means that mobile reception is almost non-existent. Great if you’re seeking peace and quiet! If you do need internet access on your phone during your stay, bear this in mind when looking for and booking a campsite. 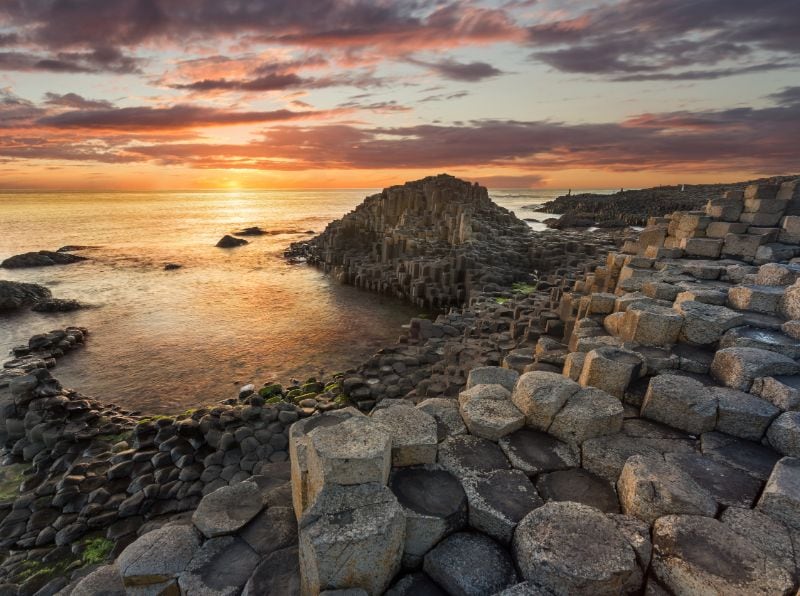 Clamber over the basalt columns of the Giant’s Causeway in Northern Ireland.

The Giant’s Causeway – built by giants

The Giant’s Causeway is a large rock formation on the coast of Northern Ireland comprising more than 40,000 basalt columns. 50-60 million years old, the formation is believed to have been created during a volcanic eruption – although that is not the only explanation. According to local legend, the Causeway came about during a quarrel between the Irish giant Fin McCool and the Scottish giant Benandonner. The Irish giant built the Causeway to allow him to fight the Scottish giant, but Benandonner destroyed the path, thereby forming the Giant’s Causeway as it is seen today.

Not far from Cheddar, famed for the eponymous cheese, is Cheddar Gorge, a gorge more than 130 metres deep and home to numerous limestone caves. One of the caves, the Gough’s Cave, was where the ‘Cheddar Man’, a skeleton dating back more than 9000 years, was found. The area around Cheddar Gorge is great for hiking, climbing and cave exploring, plus there’s also the Museum of Prehistory, which is worthy of a visit.

Visiting Cheddar Gorge: Cheddar Gorge is located in the county of Somerset and close to Bristol and Bath. A public road runs through the Gorge, toll-free. Public footpaths also run along the tops of the cliffs. If you want to dive in – literally and figuratively, buy a pass for Cheddar Gorge (£17 online) for access to the caves, with audio tour, and unique footpaths including ‘Jacob’s Ladder’. 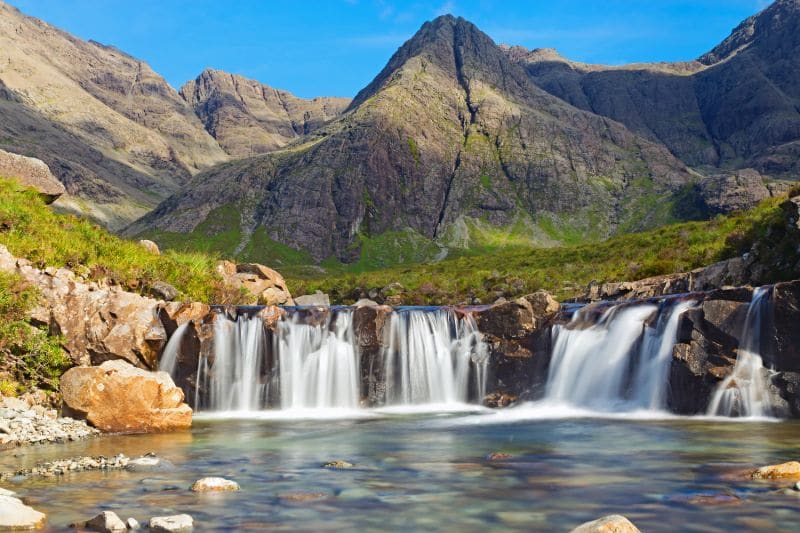 The Fairy Pools on the Isle of Skye

The crown jewel of the Highlands – the Isle of Skye

The Isle of Skye is a small island off the coast of northwestern Scotland, connected to the mainland by a bridge. Even if this is your first visit, you may find the landscape familiar – this rugged region has been used as the backdrop for various films, including the BFG, Snow White & the Huntsman and Transformers: The Last Knight. As you drive around this green island, you’ll discover beautiful beaches, quirky rock formations, picturesque villages…. and sheep, of course. A holiday to the Isle of Skye is highly recommended.

Visiting the Isle of Skye: You can easily drive around the island in a single day, but a longer stay is certainly worth it. Thankfully, the Isle of Skye is home to a number of campsites. The Italian Riviera in Wales – Portmeirion

Portmeirion is a fantastic holiday destination on the western coast of Wales. The village is constructed in Italianate style, with construction of the first buildings and housing commencing in 1925 – it took until 1976 for them to be completed. Today there are hotels, a resort, award-winning restaurants, beautiful beaches and subtropical gardens.

Visiting Portmeirion: Portmeirion is open between 9.30 am and 4.00 pm all year round. Entry fees apply. If you want to book a meal at certain restaurants or visit the spa, entry is included. 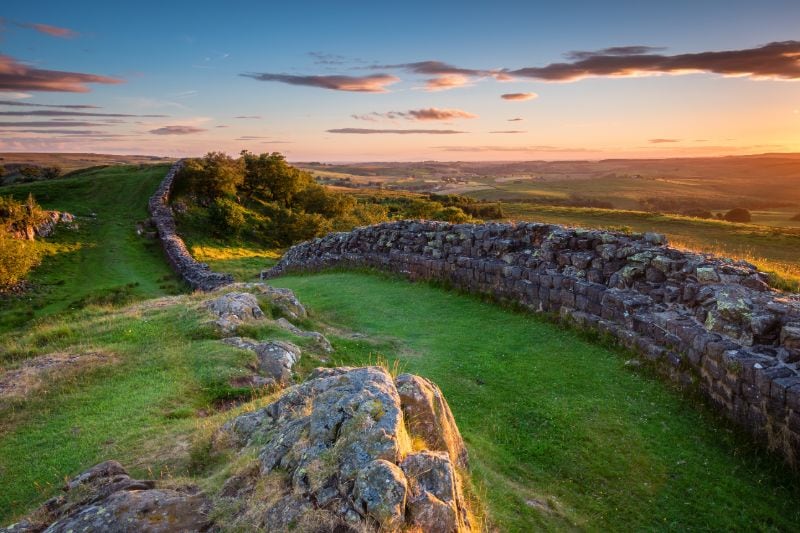 Walk along the centuries-old Hadrian’s Wall.

In the second century AD, Roman Emperor Hadrian ordered a wall to be built to protect the Roman Empire from the barbarians to the north. The long stone wall can be found in northern England, close to the current border between England and Scotland. A significant length of this ambitious structure remains today, and you can walk the 135 kilometres along the Hadrian’s Wall Path. 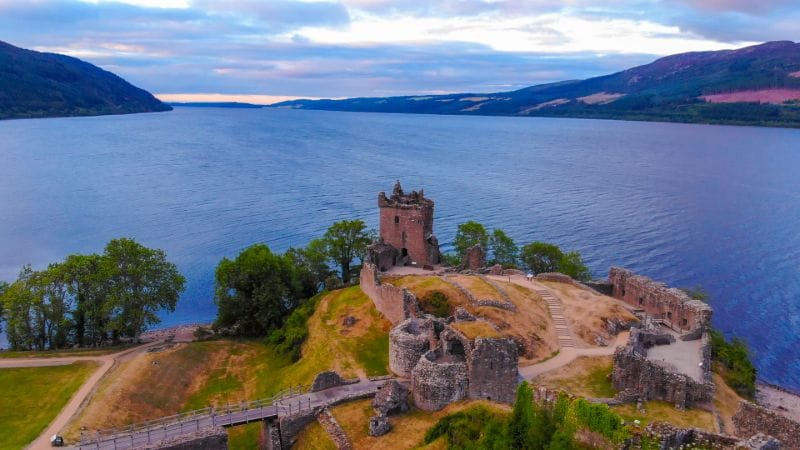 Can you spot the monster?

Search for the Loch Ness monster

The vast, mysterious Loch Ness in Scotland is one of the most famous lakes in the world, not least because of the monster said to live in its deep, dark waters. And at 24 kilometres in length and 227 metres depth, there’s certainly plenty of room. There have been numerous alleged sightings of the monster over the years, but even if you don’t have one, there’s still plenty to see around Loch Ness. You could visit Urquhart Castle or the Loch Ness Centre & Exhibition for instance.

Visiting Loch Ness: If you follow the A82 between Fort William and Inverness, you’ll pass along Loch Ness for a short distance. If you’d like to learn more about the history, geology and the monster, drop in at the Loch Ness Centre & Exhibition, which costs around £9. 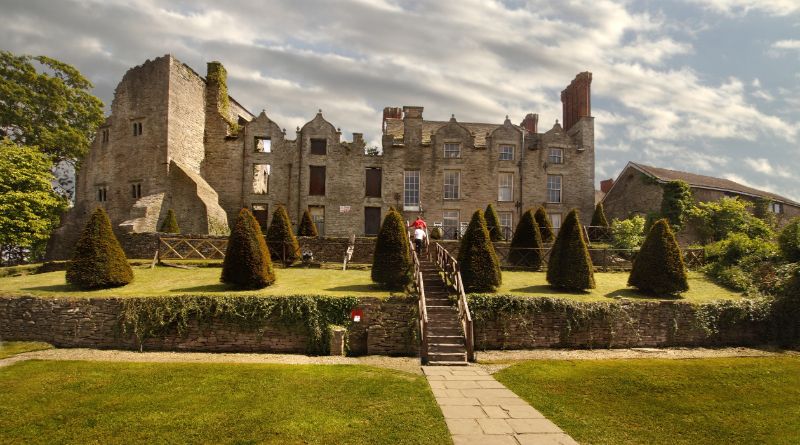 Hay-on-Wye – for the bookworms

Smack on the border between England and Wales is Hay-on-Wye, famed the world over for its many book shops and the annual Hay Literary and Arts Festival, which takes place in May. The festival began in 1987 around a kitchen table, and has evolved into a ten-day festival of literature, music and cabaret, attracting more than 250,000 visitors. In 2001, former US President Bill Clinton described the festival as the Woodstock of the Mind.

Visiting Hay-on-Wye: Hay-on-Wye is a small town. You can park at the tourist information office (chargeable) and stroll around the town on foot. You can walk the centre of the town in around twenty minutes. Prefer to browse the book shops? Leave a little more time.

If you have any other tips for a holiday in England, Scotland, Wales or Northern Ireland, please let us know by commenting.