Home » Destination » Motorhome rules in Spain: what do I need to bear in mind? »

Motorhome rules in Spain: what do I need to bear in mind?

The Spanish Costas, cities like Madrid, Valencia and Barcelona, the Mediterranean climate or the countryside and the Spanish interior. We can all find a reason to visit Spain, and every year thousands of Europeans head for this beautiful holiday destination with their motorhome. But what about the traffic rules in Spain? When travelling in Spain with your motorhome, what are you allowed to do, and what aren’t you allowed to do?

The basic rules in Spain are virtually identical to the standard traffic rules we use in the European mainland – that includes the rules about who takes priority. You drive on the right, you must overtake on the left, and traffic from the right has priority (except on roundabouts). Most roads in Spain are free to use, but there are a few toll motorways and autovías. An “autovías” is the same as a motorway, except that it can be used by agricultural vehicles and bikes when there’s no alternative. Toll roads in Spain are identified by the letters AP, while toll-free motorways are identified by the letter A.

You can’t just spend the night anywhere in Spain. Wild camping may be allowed under some conditions, and checks are not strict everywhere, but in principle, you’re only permitted to stay overnight at parking spaces designed for motorhomes, or at campsites or at vineyards or farms for example. Wild camping is not permitted at any of the national parks in Spain.

Parking a motorhome is allowed anywhere, provided that the parking space is suitable and there’s no sign banning the parking of large vehicles. Eating and drinking in a parked motorhome is fine (even cooking is fine), but you’re not allowed to convert a parking space into a ‘motorhome pitch’. That means that you can’t set up tables and chairs outside, that the awning must remain folded up, and that you can’t put up your TV dish. It’s also true that these rules are not enforced equally strictly all across Spain. 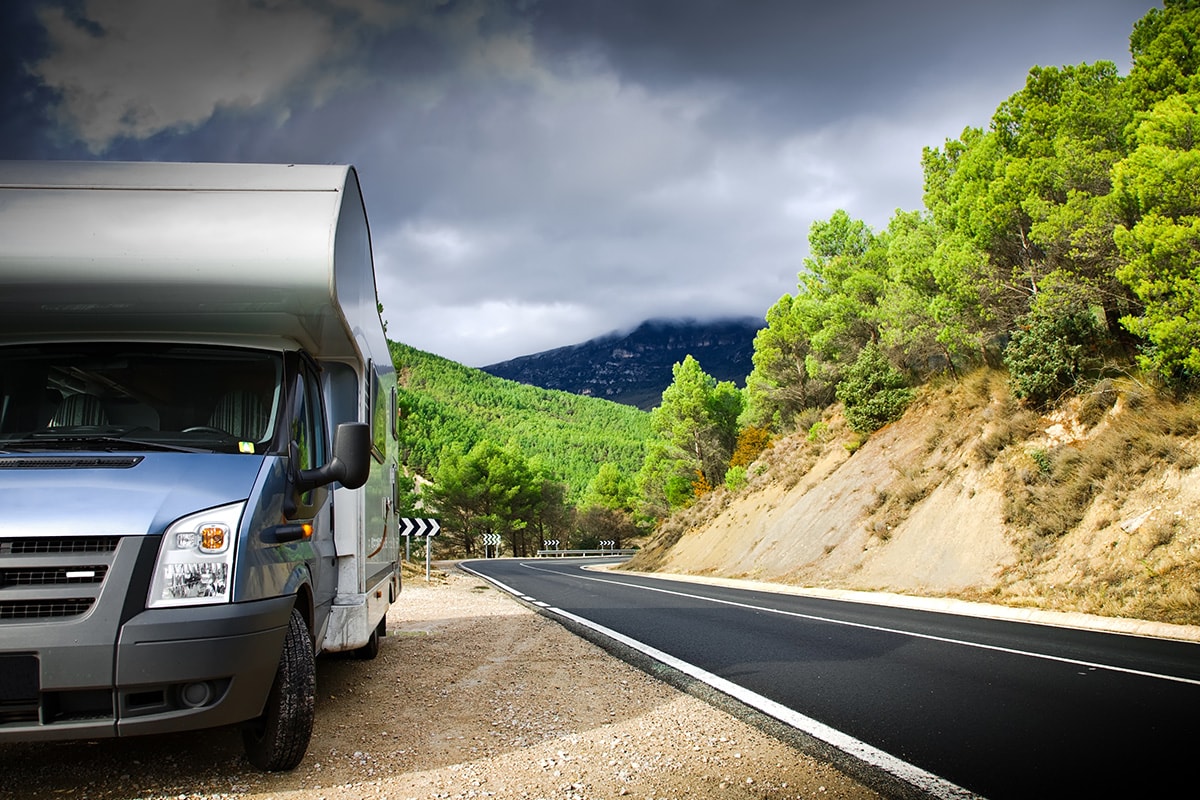 The Spanish countryside is very diverse. From touristy beaches to the unspoiled hills, Spain has it all. If you’re driving through the hills in your motorhome, bear in mind that there are some traffic rules that differ from the normal rules. On slopes with more than 7% incline, vehicles going up always have priority over vehicles going down (unless the vehicle going up is close to a passing place), and on mountain roads, it’s mandatory to sound your horn on blind bends.

In areas like the Pyrenees and the Sierra Nevada, you can sometimes encounter wintery conditions. The use of snow tyres isn’t mandatory in Spain, but it is recommended for these areas in wintery weather. Snow chains may only be used on roads covered in snow or ice, and their use is mandatory if indicated by signs or by the police (maximum speed when using snow chains is 50 km/h). If you’re using studded tyres, the studs cannot protrude more than 2mm.

In Spain, motorhomes (<3500 kg) are seen as category 1 (M1) vehicles, and because of this, different speed limits apply to them outside of urban areas. A motorhome is not allowed to drive faster than 100 km/h in Spain. The following are the speed limits on Spanish roads:

The driver, co-driver and all passengers must wear seatbelts. Children under 1.35 metres are not allowed to sit in the front, and are only allowed to sit in the back (in an approved and appropriately-sized child seat). Children who are taller than 1.35 metres are allowed to sit in the front and use a normal seatbelt. However, in Spain it is advised that children up to about 1.50 metres tall use an approved, appropriately-sized child seat or booster seat. Pets must either be restrained using a dog seatbelt, or they must be transported in a crate or box (of course, this should also be fixed somewhere so that it doesn’t move around in case of an accident). Neither passengers nor pets are allowed to walk around when the motorhome is moving.

Finally, here’s some useful information and handy tips for those who are planning a trip to Spain:

What are your experiences of driving in Spain? Or do you have tips or suggestions for others? Then leave a comment under this message.