Are we there yet, are we there yet? When you set off for the sunny south, there are many kilometres ahead of you. The most obvious way to cover these distances is to use the motorways. But in both France and Spain, you pay a toll for the distances you cover. Not happy about that? There is a great alternative!

Simply use the tourist routes that will take you to Spain via lovely country roads (and only a couple of toll roads). Nice and inexpensive! And you will happily take that extra travelling time for granted as you pass through the beautiful countryside you would otherwise have missed. We will share with you the best and (almost) toll-free routes in France and Spain in this blog.

Motorways take you quickly from A to B, but keeping the roads maintained costs money. So governments ask drivers for a contribution. In France and Spain this is different to Britain. On many motorways there you will pay a toll to use the section you are driving along. In France these roads are known as péage, in Catalonia they are peatge, and in the rest of Spain they are called peaje. Foreign visitors also have to pay their way. To reach the South of France, you can expect to pay up to 120 euros, depending on the type of vehicle (with or without a caravan or trailer tent). For many holidaymakers, that’s a good reason to drive along the country roads. 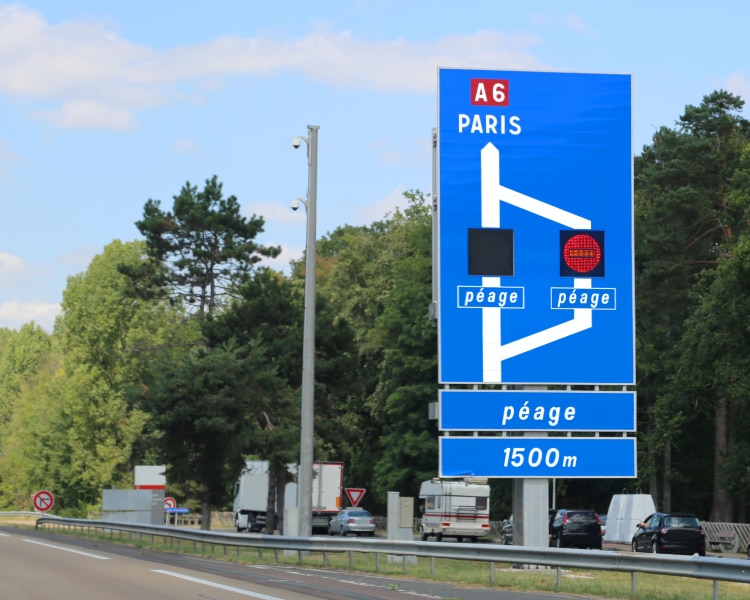 You can already see the signs in the distance – that means paying a toll!

Via Paris to Spain

Life is full of choices, also when it comes to camping. Toll roads are ideal for those who want to sit firmly attached to the steering wheel, so they can flop down on the beach as quickly as possible. Ridiculous, say those who favour the tourist routes; by not sticking to the beaten path, you will discover any number of wonderful regions in France and Spain. And that can be fun!

Spain itself has relatively few toll roads, but tourists will encounter them quite often. The AP-7, which extends along the most important tourist destinations from La Jonquera to Tarragona, such as the Costa Brava, is no longer a toll road since 1 September 201.

Another route with a toll is the AP-2 from Barcelona to Zaragoza. This toll will also end in September 2021. The AP-68 from Zaragoza to Bilbao will remain a toll road until the end of 2026. The motorway from Bilbao to San Sebastian and the French border will remain a toll road for the time being, as will a number of routes around Madrid and smaller routes in the rest of the country. 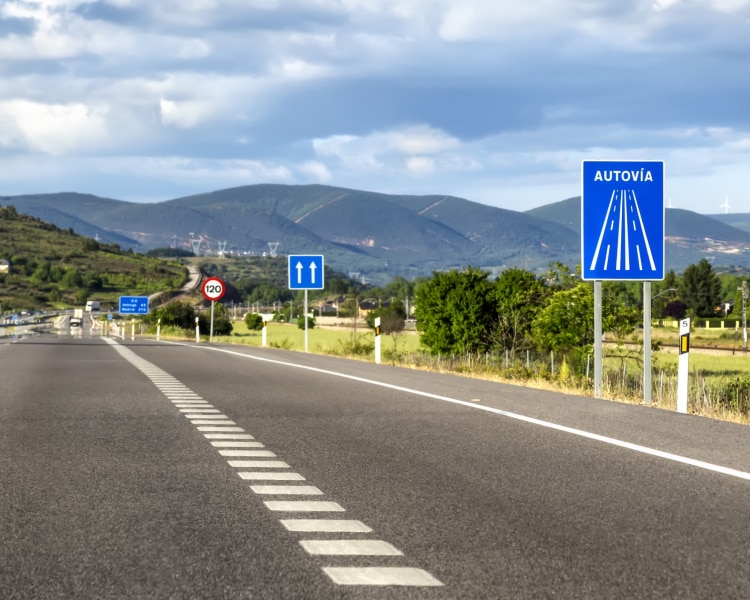 A beautiful autovía with the mountains as a background, who wouldn’t want to drive there?

Avoid the tolls using the autovías

The network of autovías (A roads) is very extensive and serves the whole country. They are motorway standard roads, are free, but have many junctions. In some cases they run parallel to the toll motorways.

The advantages of a toll-free route

Things to watch out for

In order to be well prepared for your journey, we have a number of tips and tricks for you if you want to avoid toll roads in France and Spain.

You’ll save yourself a horror story if you decide to use toll-free roads.

Free toll-roads in France and Spain

The French thankfully make an exception for a number of motorways, where you don’t have to pay tolls. To mention a few, there is the A20 near Limoges, which is free for a large part. Another popular route is the A75, where you pay only to use the Millau Bridge. Definitely a ‘must’ so you can enjoy the views by this spectacular bridge!

In Spain, next to the autopistas (motorways) there are autovías which are free and for which the same maximum speed limits apply. It makes an ideal and cheap alternative and will take you almost no extra travelling time.

If you’re not going any further than France, there are also many child-friendly campsites there with lovely camping pitches and luxurious accommodation. There is plenty of choice with Eurocampings.

Do you know of any more toll-free, or almost toll-free routes that we haven’t mentioned? Let us know below and lend your fellow campers a hand!

Still looking for a great campsite in Spain?