Spectacles of nature while camping: tips for nature lovers and animal lovers

Hundreds of thousands of starlings flying in amazing formations in the Danish Rickelsbüller Koog. Or the highest waves in the world in Nazaré, Portugal. There are some natural wonders you just don’t want to miss.  We have drawn up a list of several European spectacles of nature that you can see at specific times of the year. The locations of these spectacles of nature are given below. So you can be at the right place at the right time.

The greatest spectacles of nature in …

Spectacles of nature in the spring

In the spring, nature wakens from its winter sleep. The first sunny days herald the appearance of crocuses and tulips. Immediately everyone is a little more cheerful – campers in particular. They can finally go to the campsite again!

Visiting the flower fields: when are the tulip fields blooming? 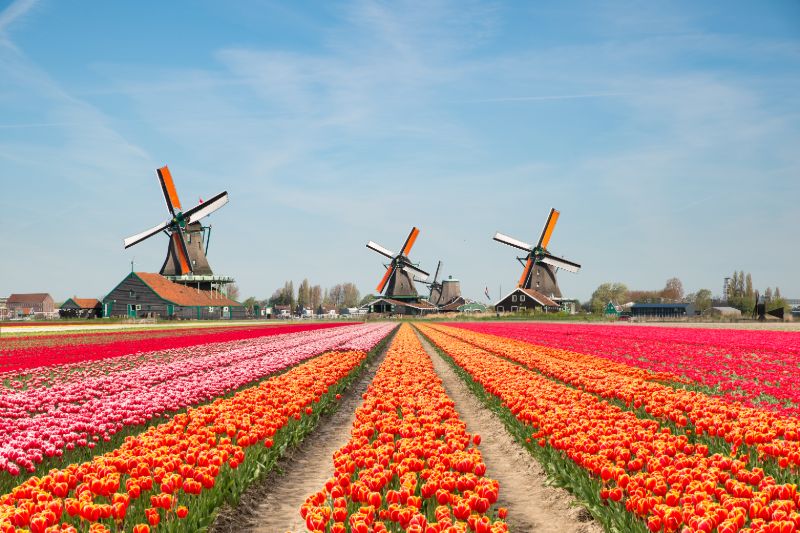 Colourful tulip fields in the Netherlands

Annually the tulip fields in the Netherlands attract thousands of tourists from abroad. The most famous tulip fields can be found in the Keukenhof in Lisse (South Holland). But did you know that most of the tulips are cultivated in the Northeast Polder? Every year, from mid-April till the beginning of May, the Tulip Festival takes place in Lelystad. Most of the tulips are blooming this time of year.

For families: spotting lambs on Texel 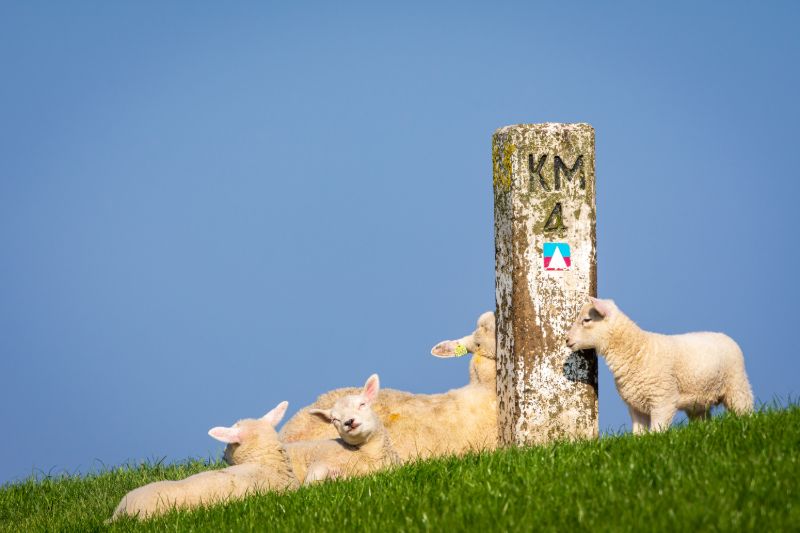 Texel lambs in the spring

What is cuter than seeing thousands of lambs gamble about together? The Dutch island Texel is the place to see this. The Texel sheep have their lambs during spring time. The best way to admire them, is along the new hiking path through the high Mountain. This 6.5-km path takes you straight through the sheep breeding areas. There are plenty of campsites on Texel, so why not make a camping trip out of it?

The ‘black sun’ in Denmark 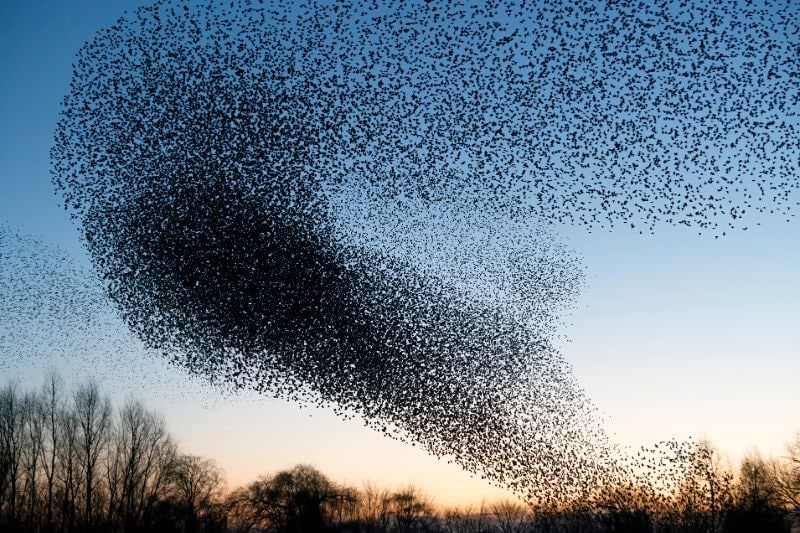 A murmuration of starlings at sunset

During spring and autumn, hundreds of thousands of starlings gather in Danish coastal areas around the North Sea. The migratory birds are known for flying in huge swarms in special formations, called the ‘Black Sun’ or a ‘murmuration of starlings’. Good locations to see this phenomenon are the large nature reserve Rickelsbüller Koog (535 hectares) on the German/Danish border and the protected nature reserve Tønder Marsken. Several campsites can be found in the area. Some campsites will give you a discount in the low season with the CampingCard ACSI. This is ideal, since the starlings gather from mid-March to the end of April and from September to the end of October. 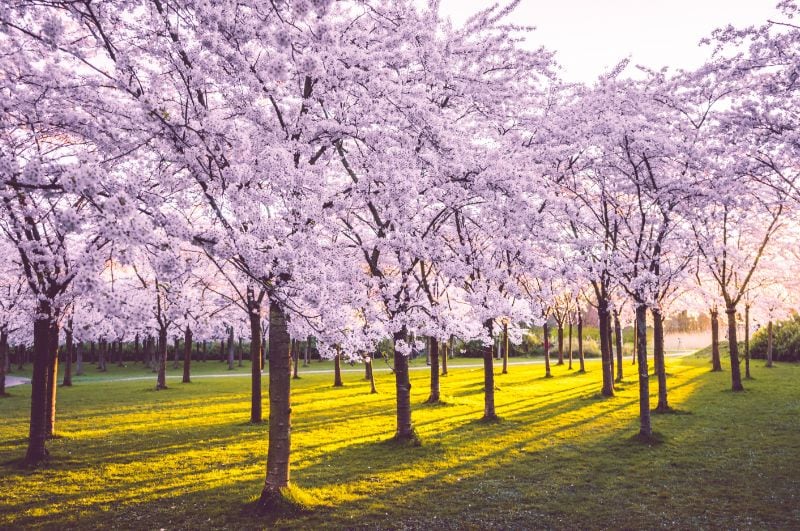 Cherry blossoms in the ‘Amsterdamse Bos’.

Every year, the cherry blossoms are a special spectacle of nature. In the Netherlands, the Betuwe turns pink, and the Amsterdamse Bos and the South Limburg municipality Eijsden-Margraten have many cherry blossoms as well. The cherry blossoms usually bloom mid-April, although this does depend on the weather. The blossoms last 10 to 14 days. You have to pick the right time and have some luck.

Spectacles of nature in the summer

The warmth of summer entices you to go outdoors and explore the surroundings. Most campers travel in the summer to enjoy the beautiful weather. The long days make it feel as if every day holds more hours.

When does the lavender bloom in the Provence? 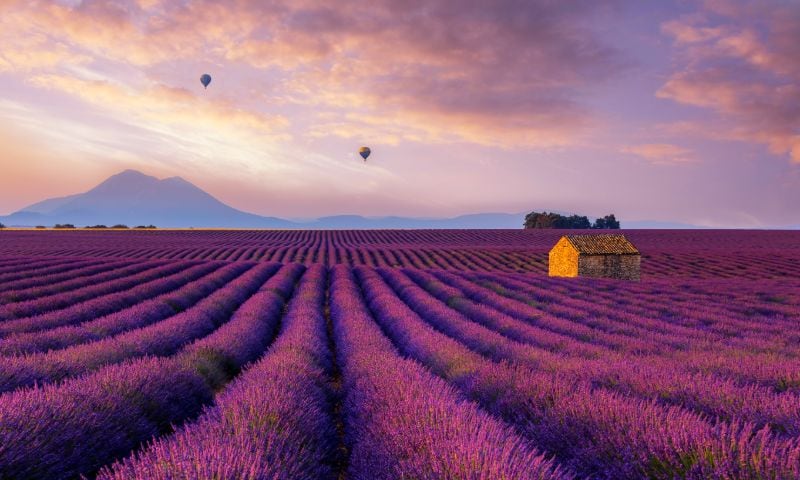 Lavendel in the Provence

The lavender fields in the Provence are famous! Lavender usually blooms from the early or mid-June until around early or mid-August. But, like with the cherry blossoms, the exact time of blossoming depends on the temperature. One of the more popular places to see the lavender bloom is the Vaucluse department in the Provence. This is where the famous and photogenic abbey of Sénanque is located.

Would you rather visit lavender fields that are somewhat less popular? Explore the area around Lourmarin, Gordes or Nîmes. There’s a good chance you will have a lavender field all to yourself. And after a day of driving around in the region, bring your day to a close in a French bistro with local specialties.

Pink flamingos in the French Camargue 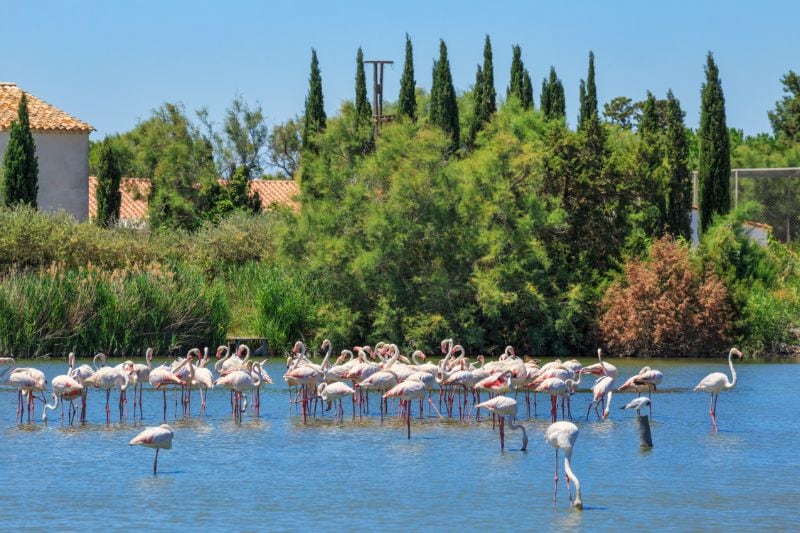 Each year there are more pink flamingos to be seen in Camargue Regional Nature Park (Provence). This is one of the few European breeding locations for flamingos on the Mediterranean Sea. Experts surmise that the number of migratory birds in the nature park has increased because of the consequences of the corona pandemic. Because of the lockdown, almost no people came to the area, which allowed the birds to nest in peace. Since the number of flamingos increased, the birds were forced to find new breeding grounds. The flamingos landed in the National Park Po Delta, where you can admire them now as well. 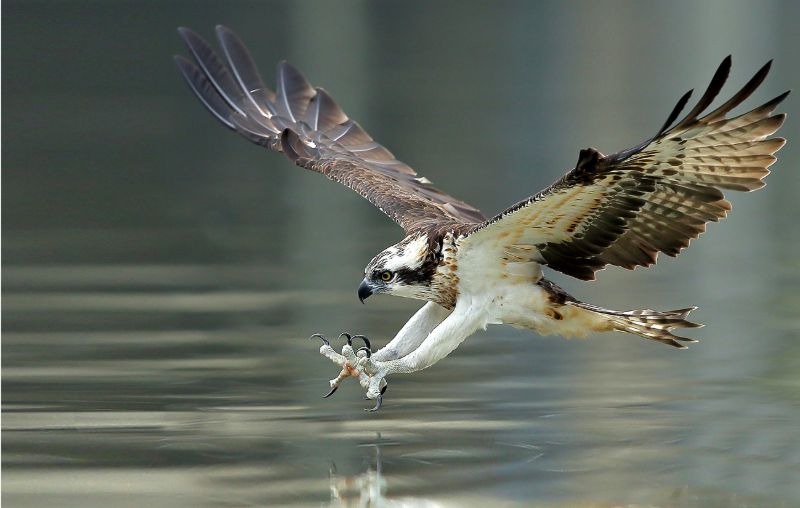 An osprey in the Müritz National Park.

The osprey is a special bird. These impressive birds of prey are rather large and are not seen here often. The bird has been sighted once in a while in the Netherlands, but a brooding osprey is a rare sight. The bird of prey does nest in the German National Park Müritz. The bird returns from the south in the spring to breed in the area. The best time to see the bird is early in the summer, which is when the young birds are starting to learn to fly.

Purple plains: when does the heather bloom? 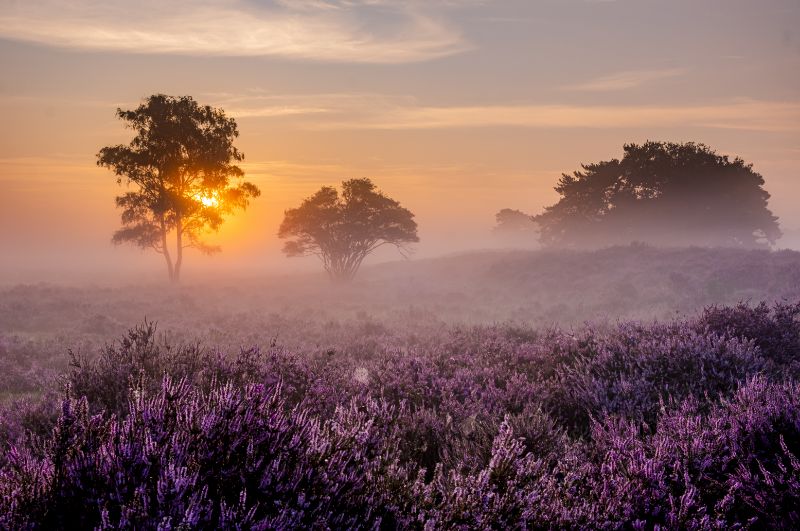 Heather is most beautiful when in bloom. Visit the heath on the Veluwe in the Netherlands to see this for yourself. Flowering time is between mid-July and mid-September. Campsites on the Veluwe are the ideal starting point for walks and cycling through the heathland. For German heather, the best location is Lüneburg Heath Nature Park. Wander through the picturesque countryside and wind up your walk at a konditorei (confectionery) in one of the nearby villages.

Campsites on the Veluwe

Spectacles of nature in the autumn

The leaves changing colour make autumn a spectacle of nature in itself. The woods turn colour, and the animals slowly prepare themselves for hibernation. The change in nature is amazing to see and it invites you to come outdoors. Put on a pair of good walking shoes and explore the autumn landscape.

The highest waves in the world in Nazaré 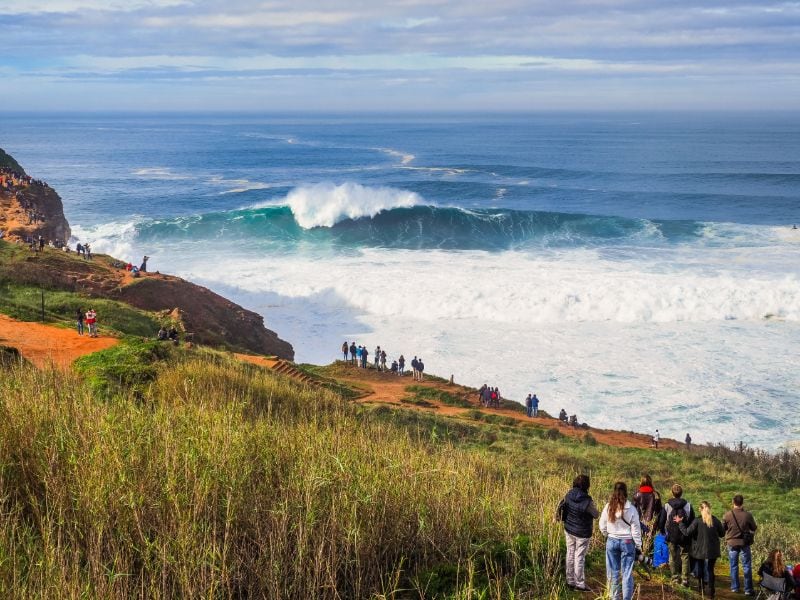 The monster waves of Nazaré

Waves as high as a block of flats that is thirty metres high – they really do exist! These giant waves can be seen in the autumn in Portugal’s Nazaré, where they are created by an underwater canyon. Waves are usually checked by the water becoming increasingly more shallow. This is not the case in Nazaré, which is why the monster waves occur. The Nazaré Canyon is 5 kilometres deep and runs 230 kilometres into the sea. The season for the ‘monster waves’ begins in November and lasts until February – an ideal time to escape the cold in the Netherlands during a camping holiday in Portugal.

Campsites in the near Nazaré 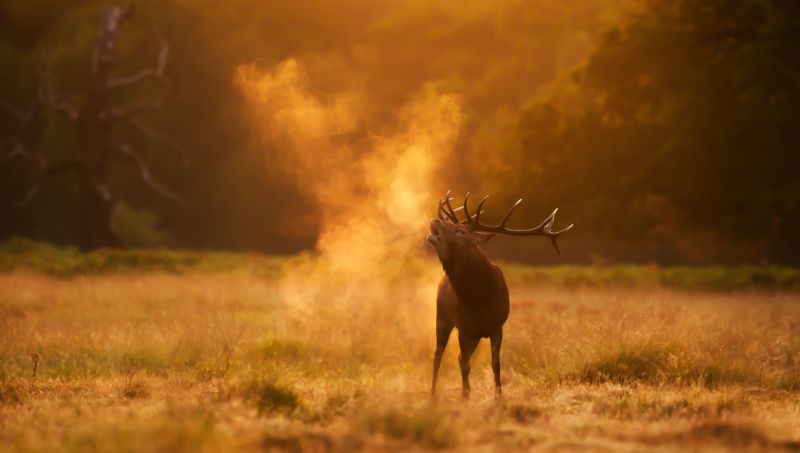 Deer rutting in the forest

You can hear the bellowing of deer in the golden autumn landscape of various nature reserves and forests starting in mid-September. The deer rutting season is the time that the deer look for a mate. The males sound their mating call, called belling. In the Netherlands, the belling of the deer can be heard on the Veluwe and in the expansive landscape of the Oostvaardersplassen nature reserve. You are more likely to encounter belling deer if you go out at sunset or sunrise.

Campsites in the Black Forest

Mysterious spectacles of nature: owl courtship dance in the autumn 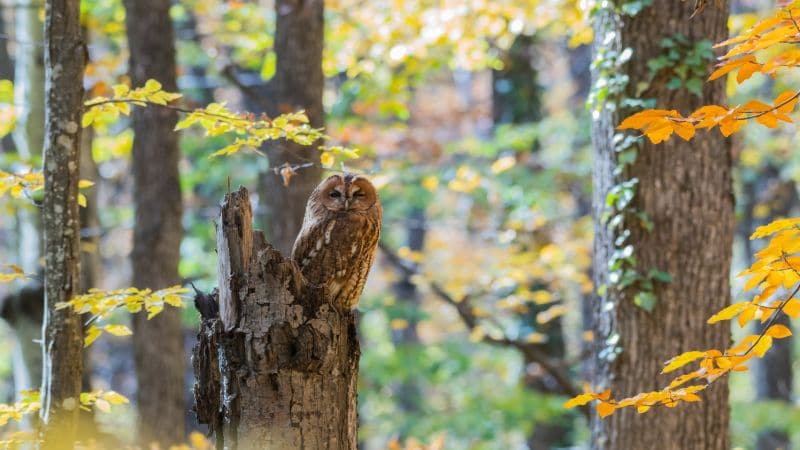 The tawny owl in the autumn

The owl courtship dance is somewhat more subtle than the deer rut. The courtship dance is a search for a mate. This takes place in the spring when the owls lay their eggs. In the autumn, however, the young leave their nest and young males claim their territory. You can hear what that sounds like in the German Black Forest. The mating song resounds through the forest from sunset to sunrise. A great opportunity for an evening or night walk!

Frost flowers in the forest 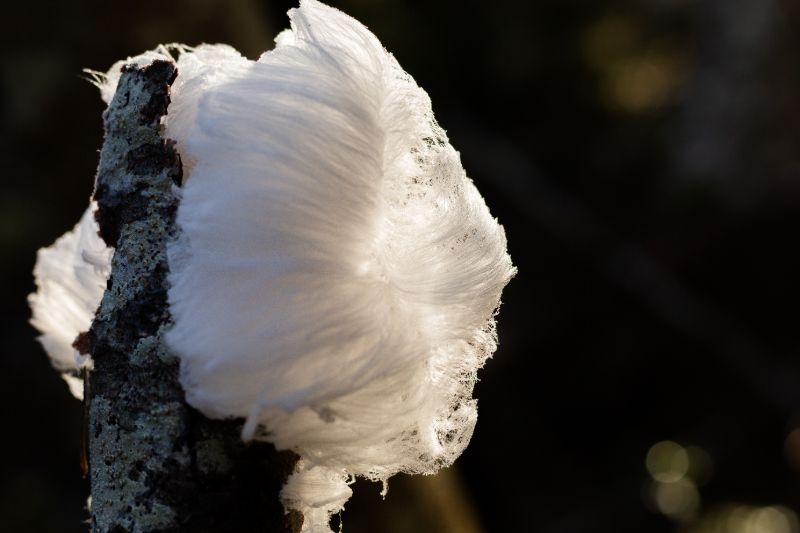 Frost flowers in the forest

Spectacles of nature in the winter

Winter has its own magic. During the cold season, nature is hushed and, with a bit of luck, you can experience a snowy winter landscape. With some preparation, you can go camping in the winter as well. 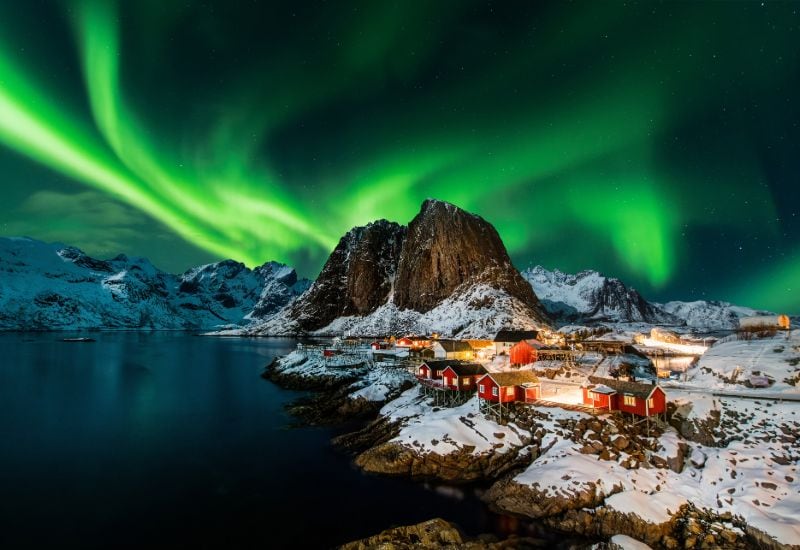 The northern lights are one of the most spectacular spectacles of nature. The best times to see the northern lights is from December through February. Travelling to Norway, Iceland or Lapland (Finland and Sweden) is best for this. The further north you travel, the greater the probability of seeing the Aurora Borealis even earlier in the year 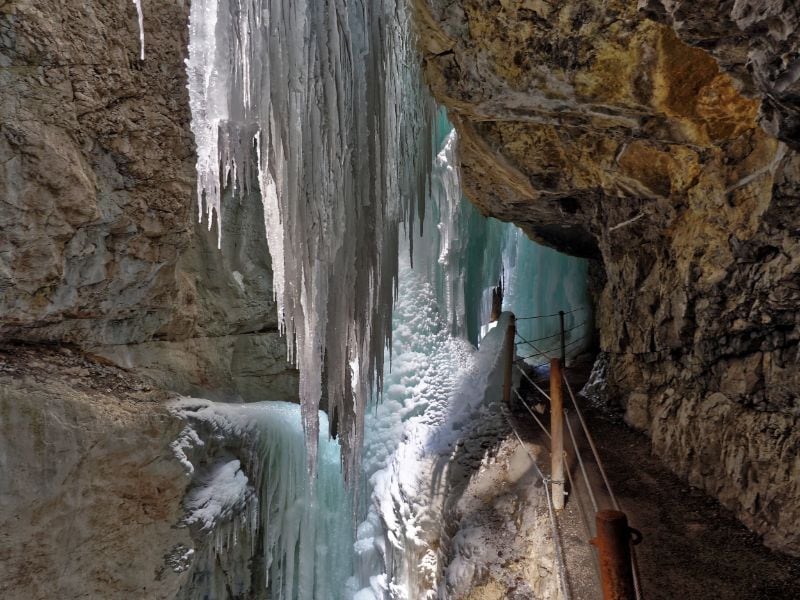 The Partnach gorge is impressive to see, especially in the winter

The Partnach Gorge is located in Bavaria in Germany. The gorge is about 800 metres long and 80 metres deep. It is a spectacular sight in the winter especially, when the waterfalls are frozen. Hike through the gorge with a guide during a torch-lit hike or go out on your own. There are various campsites in the area open for camping in the winter.

Campsites in the north of Finland 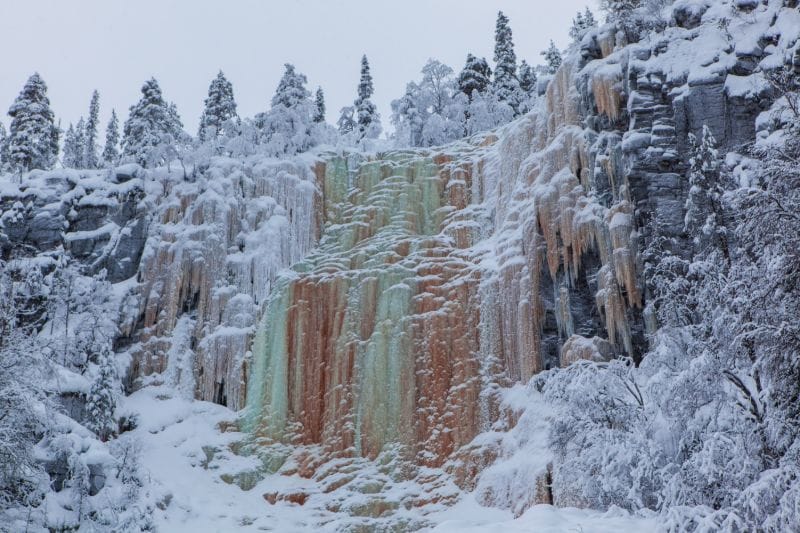 Even larger masses of ice await the brave winter camper in the south of Finland’s Lapland. In the winter, the Korouoma Nature Reserve has the largest ice waterfalls in Finland. Hiking to the waterfalls takes about four hours. Be sure to put on warm clothes because it is very cold in Lapland.

Have you already seen one (or more) of these spectacles of nature? Or have you seen another spectacle of nature that we have not included? Let us know in the comments below.