Home » Activities & Events » Cycling and camping in the Netherlands: what you need to know »

Cycling and camping in the Netherlands: what you need to know

When I think of the Netherlands I think of vast green fields and windmills. Doesn’t the wind make cycling really hard?

It’s nowhere near as bad as you might think. Just like everywhere else, there are sometimes hard winds in the Netherlands. The wind is usually stronger near the coast and in an open landscape you will notice more of it. Fortunately, however, the cycling routes are very varied and often you’ll find there’s hardly any wind at all. There are plenty of bends to keep the wind at bay, or you may be sheltered by a dike, trees, bushes or buildings. You can check out the wind’s speed and direction on a weather app during the day and adjust your cycling route accordingly. Cycling through the vast Dutch landscape over dikes is highly recommended. The vistas go on for miles, the skies are stunning, and there are plenty of animals and birds to spot. 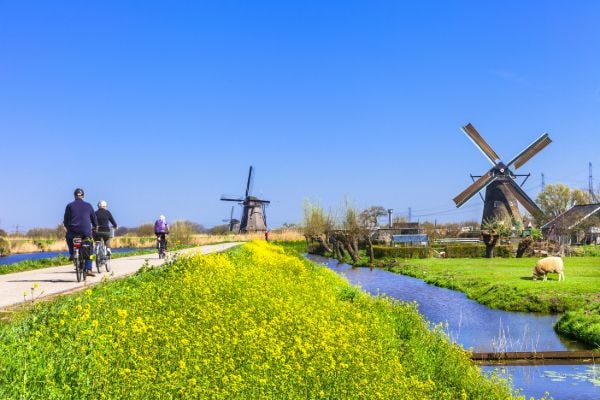 Cycling through the Dutch landscape.

I want to get on my bike and start a nice route right from the campsite, without having to drive anywhere first. Which campsites can you recommend that have great cycling right next door?

Here comes the good news: your wishes will come true at just about any campsite in the Netherlands. The cycling infrastructure is excellent throughout the Netherlands with good cycle paths, cycle bridges, ferries and extensive signposting. There are also plenty of campsites. These sites are often located just outside a village or town. You can easily cycle from the campsite to the nearest town, or head into the countryside for a taste of nature. So choose the region or route that you would like to explore by bike, and then look for nice campsites in that location. You can also rent bicycles at many campsites in the Netherlands. And if not, the campsite owner will be happy to tell you where there are bikes for hire nearby. 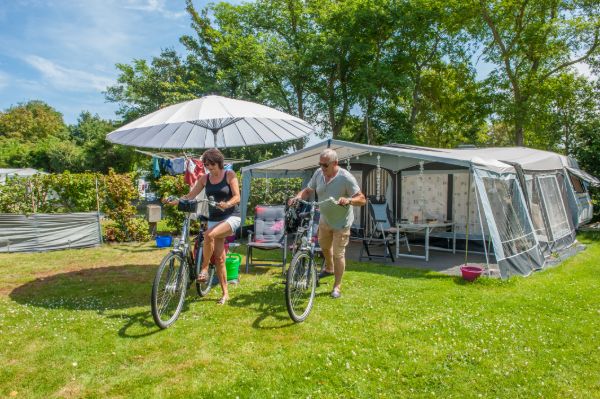 It is always easy to set off by bike from Dutch campsites.

Is there a handy app for mapping out routes?

Yes, there is! The app ‘Fietsknoop’ , which is available in English, French and Dutch, is really handy. In this app, you can map out your route via the Dutch cycle network. This network consists of many numbered cycle junctions (knooppunten in Dutch). You can cycle from junction to junction. This network of cycling junctions can be found throughout the Netherlands and even without an app it’s a great and easy system to find your way around. Many places have big signs with maps showing the numbered junctions in the area and the distance in kilometres between the junctions. There are also plenty of other signs and signposts to help you find your way. This means you don’t have to plan ahead. Just cycle where the wind takes you! 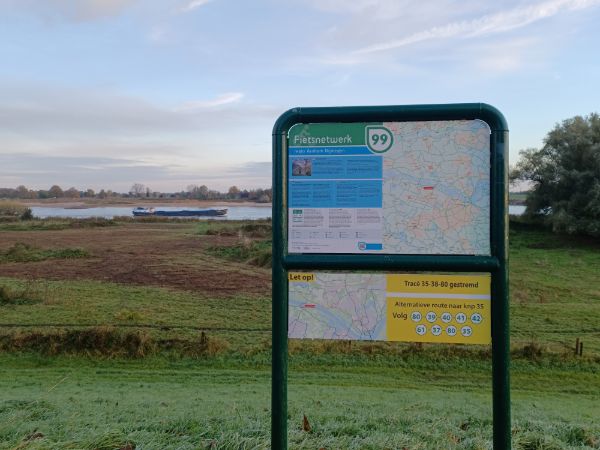 Throughout the Netherlands you will find cycle network signs and street markings.

Are there also long-distance routes in the Netherlands? Which campsites are best for those?

There are several long-distance cycle routes in the Netherlands, such as the Kustroute (610 km) along the North Sea coast, the Zuiderzee Route (440 km) around IJselmeer lake, or the circular national route Rondje Nederland (1385 km). Because there are so many campsites in the Netherlands, a cycling holiday with overnight stays at different campsites is perfectly doable. Just keep the Eurocampings.co.uk website next to your planned route and plan your holiday. Looking for charging stations for your e-bike on the go? Visit fietsoplaadpunten.nl (website also available in english).

Some inspiration for cycling in the Netherlands: 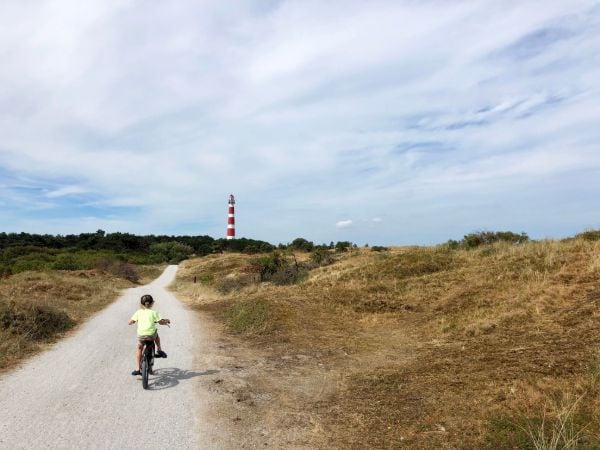 Cycling through the Dutch dunes

What about mountain biking in the Netherlands?

There are plenty of options for great mountain biking in the Netherlands. Although the Netherlands is a fairly flat country, there are plenty of places with hilly landscapes. Take the hills in South Limburg, the dunes on the North Sea coast, or the hills that were created by glaciers in the last ice age. These hills are known as moraines, and you can find them near Utrecht (the Utrechtse Heuvelrug), in the Veluwe, Nijmegen, Arnhem and in Twente (the Sallandse Heuvelrug). What the Dutch call a ‘mountain’ is often no higher than 70 or 80 metres, but the walking, cycling and mountain biking routes meander around the regions in such a way that you can sometimes make 400-500 metres altitude on one route. In recent years, more and more separate mountain bike routes have been constructed in the Netherlands especially for MTB enthusiasts looking for a challenge.

Which routes are suitable with children?

Almost all of them. Many bike lanes are physically separated from the road allowing you to cycle safely. In rural areas you may have to share the road with cars, but the other traffic is usually alert to cyclists. Children travel to and from school by bike around 8:30 and 15:00-16:00. At those times you’ll see a lot of teenagers and parents with children on their bikes. Cycling with kids is also generally fine in the cities. Please do stick to the traffic rules, stop for traffic lights, and clearly indicate your direction. In Amsterdam, bicycle traffic can be chaotic and busy.

Small children can be transported on the front or back of the bike. You can rent bikes or e-bikes in a number of places in the Netherlands with a child seat, or even a covered bike trailer to transport children (or dogs). 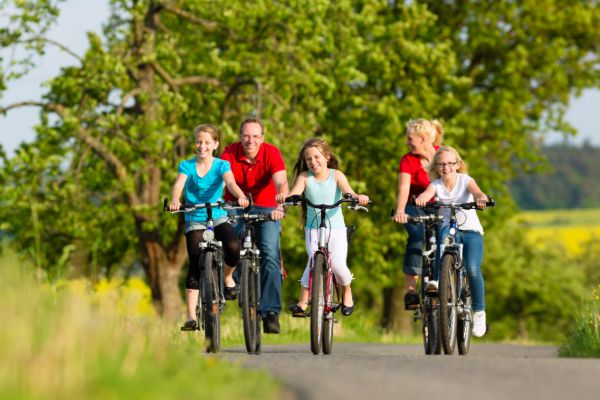 The Dutch love travelling by bicycle.

What should I know about cycling in the city?

Dutch towns and cities have good cycle paths. Cycling from your campsite to the nearest Dutch centre is highly recommended. A few tips:

Parking your bike securely in the Netherlands

Unfortunately, many bicycles get stolen in the Netherlands. E-bikes are especially popular. For good bikes, and especially e-bikes, the rule is: 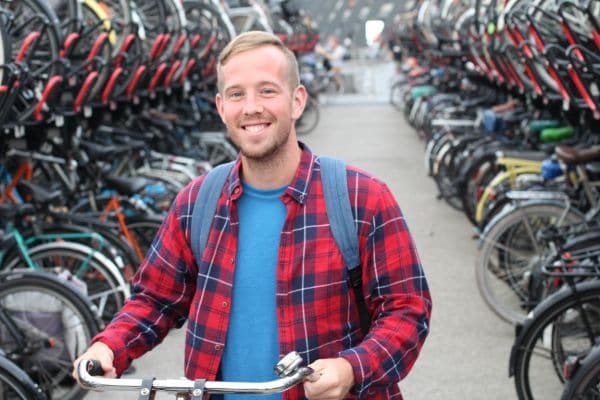 If you are heading into town by bike, park it safely in a guarded parking facility.

Main rules for cycling in the Netherlands

The most important traffic rules for cyclists in the Netherlands can be found on this website. In the Netherlands, a bicycle helmet is not mandatory. A helmet is recommended for people on racing bikes, on e-bikes, and for children. Bicyclists over the age of 10 may not ride on the pavement unless the bike lane is blocked. The permitted blood alcohol content on a bicycle is 0.05 per cent, just like for motorists.

Rules for bicycle carriers on a motorhome or caravan