Home » Destination » The 5 most beautiful castles in Saxony »

The 5 most beautiful castles in Saxony

Expressions like ‘To live like a king’ or ‘king sized bed’ indicate that noble residences appeal to the imagination. It goes without saying that visiting castles and palaces is one of the most popular holiday activities for campers. With 45 top locations nowadays managed by Schlosserland Sachsen, the monarchs of Saxony have shown a great desire to build. There is no dispute about taste, but these five gems give a good indication of all the beauty that can be found in this state.

The wooded area of Moritzburg, near Dresden, was traditionally the hunting ground of the Saxon monarchs. A hunting lodge arose here as early as 1550. Around 1730 a new hunting lodge was built in the middle of a large lake. The symmetrical Baroque shapes reflect beautifully on the water features. Until 30 November 2020, you can visit a large exhibition about 350 years ‘August the Strong’, the most influential Saxon monarch. Many myths surround his life. A tip: travel to Moritzburg by steam train from Radebeul Ost (on the Elbe). This is one of the many narrow gauge railways still in active operation in Saxony. 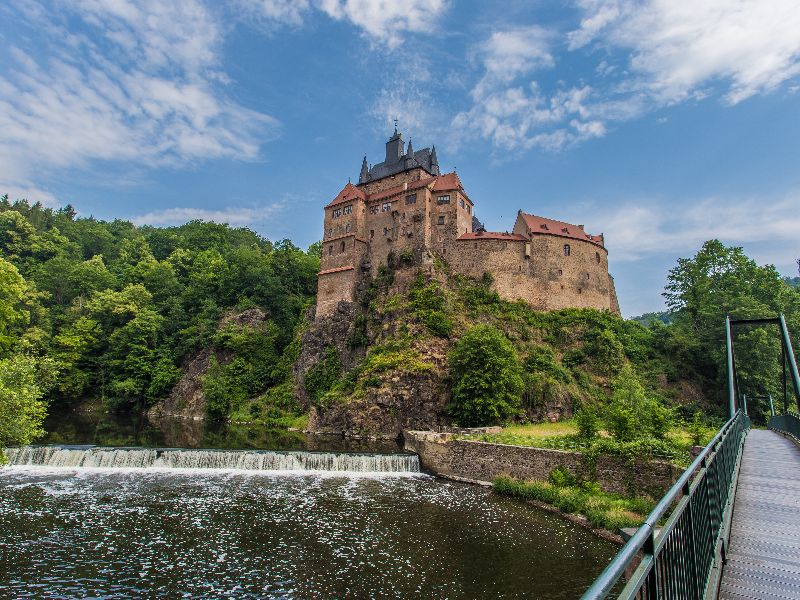 A real knight’s castle on a high rocky plateau. Kriebstein Castle can be found between Mittweida and Leipzig and is located in a wooded area. In 1415 Kriebstein was besieged for a long time. Starvation threatened and it was agreed that the female residents were allowed to leave the castle. They were only allowed to take possessions that were portable. The besieger expected the women to take their money and jewellery with them, but on the day of the liberation they left the gate with their husbands on their backs. The castle was thus conquered without bloodshed, because the agreements were kept. 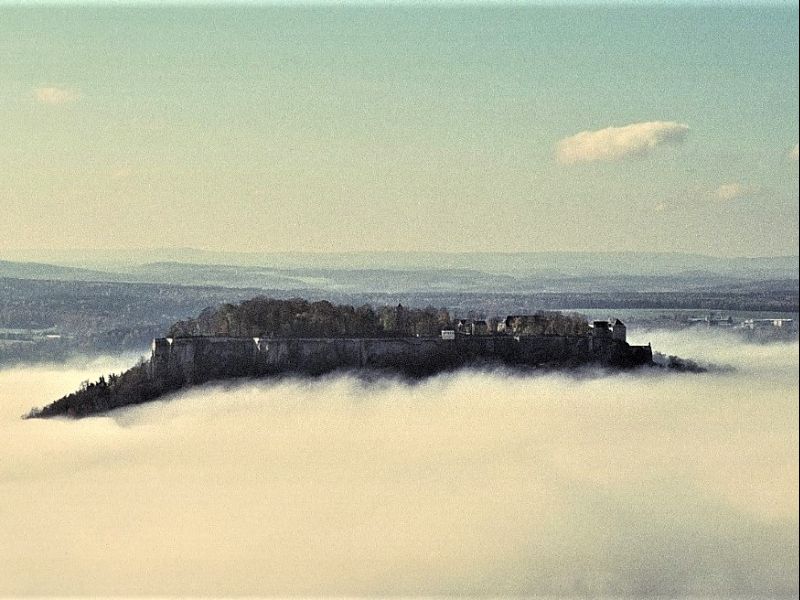 From Königstein Fortress you have a beautiful view over the surroundings of the National Park Sächsische Schweiz (Source: TMGS Sachsen).

Along the Elbe, near Pirna, the huge Königstein fortress is situated on a table mountain. No enemy ever managed to conquer this highest castle in Germany. Königstein is a complete fortified village with barracks, warehouses and a church. The barracks, on an area of almost ten hectares, are the oldest in Germany. It currently houses an annex of the Militärhistorisches Museum der Bundeswehr in Dresden. From the imposing walls the visitor has a spectacular view of the surroundings, including the National Park Sächsische Schweiz with its jagged rock formations. 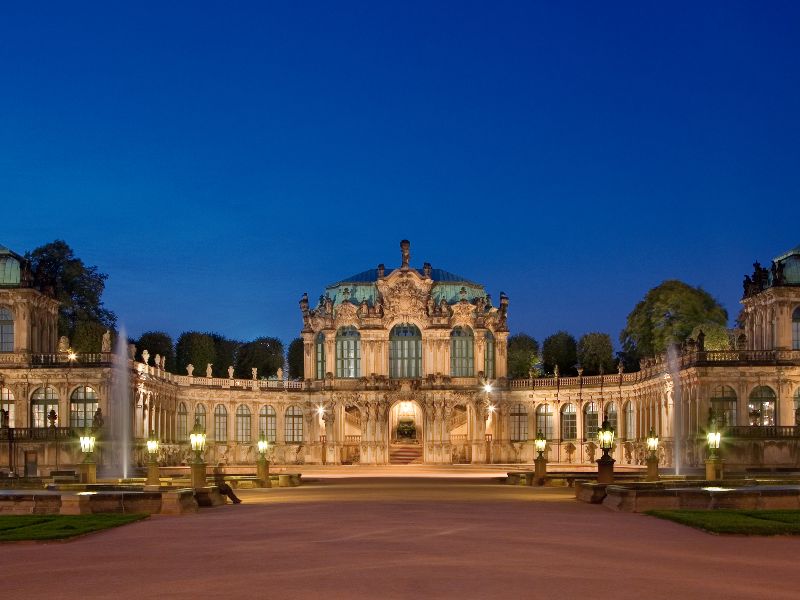 The Zwinger palace was not intended to stay in, but serves as a palace to display (art) collections (Source: TMGS Sachsen).

The Saxon monarchs have always been enthusiastic collectors. In 1709 the Elector ordered the construction of the Zwinger palace. It was never intended for the monarchs to reside in but – like the Hermitage in St Petersburg – as a palace to display (art) collections. The result is regarded as one of the finest examples of Baroque architecture in the world. The richly decorated Zwinger Palace is now one of the locations of the Staatliche Kunstsammlungen Dresden (SKD). There are world-famous works on display, including art by Rubens and Rembrandt. The top collection of old masters was closed for some time due to a major refurbishment, but visitors can now enter again through the Zwinger doors. Tip: take a walk around the palace and discover the ‘Nymphenbad’, a kind of Saxon Trevi fountain. 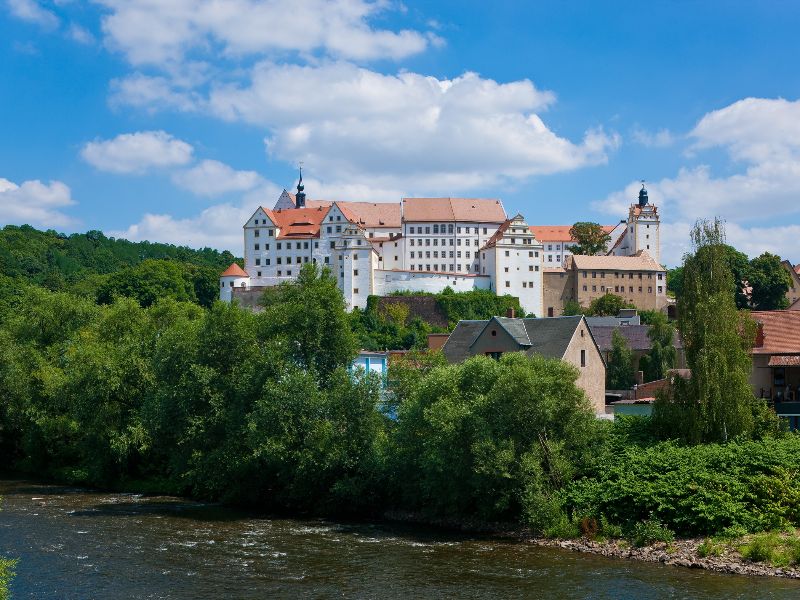 Colditz is one of the largest castles in Saxony and was used in World War II to hold fleeing officers prisoner of war (Source: TMGS Sachsen).

Colditz on the River Mulde is one of the largest castles in Saxony. Although it has been there for centuries, it became especially famous because of World War II. This is where fleeing Allied officers were held prisoner of war. Many attempts were made to break out, including several Dutch people who proved to be quite successful. TV programmes and films were even made about it. Colditz is home to an escape museum and the guided tour provides insight into the many escape attempts.

In many countries, the price of admission to castles is quite high. But not in the German state of Saxony. All 45 locations can be visited inexpensively with the Schlossermap. This card gives unlimited access for ten days. Of course to the castles in these top five, but also for example to Pillnitz Dresden Castle, Hartenfels Castle in Torgau or Augustusburg Castle in the Erzgebirge. The card costs only 42 euros for a family with two adults and children up to 13 years. Not per person, but in total! Make an unforgettable journey through the world of knights and palace lackeys in Schlosserland Sachsen.

A hospitable population, varied landscapes, nature, beautiful towns and cozy terraces. Partly because of the semi-continental climate (warm summers) Saxony is a great destination for tents, caravans or camper vans. The campsites in Saxony are of a good standard and the state offers everything for a relaxing or an active holiday.