Amsterdam is a fantastic destination for a city break in Europe. In the Dutch capital you will find a plethora of unique museums (including some bizarre ones) and just walking around the city with its canals and historic buildings is an experience in and of itself. Amsterdam is a vibrant city that also lives and breathes history. Whether it’s your first or fifth visit to Amsterdam, there’s always something new to discover. We’ve put together a list of must-do’s to inspire your next trip, including some lesser-known sights.

On the Museumplein, you’ll find the Rijksmuseum, the Van Gogh Museum, and the Stedelijk Museum. Museumplein can best be described as the beating cultural heart of Amsterdam. The square is bustling all day long; there are open-air exhibitions and markets, and even a pond where you can cool your feet on a hot summer day. In the winter months, the pond transforms into a skating rink. 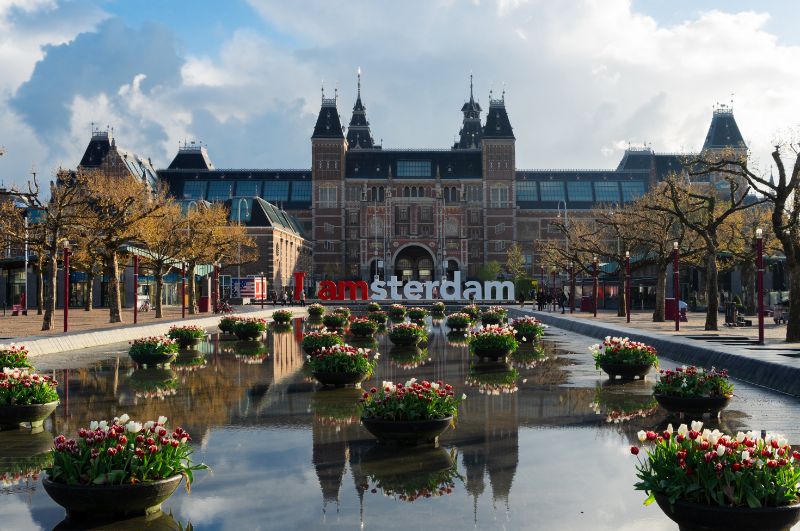 If you like cocktails, don’t miss the House of Bols! Learn all about cocktails and genevers at this Museumplein cocktail bar. You can also taste some varieties to find your favourite flavours. 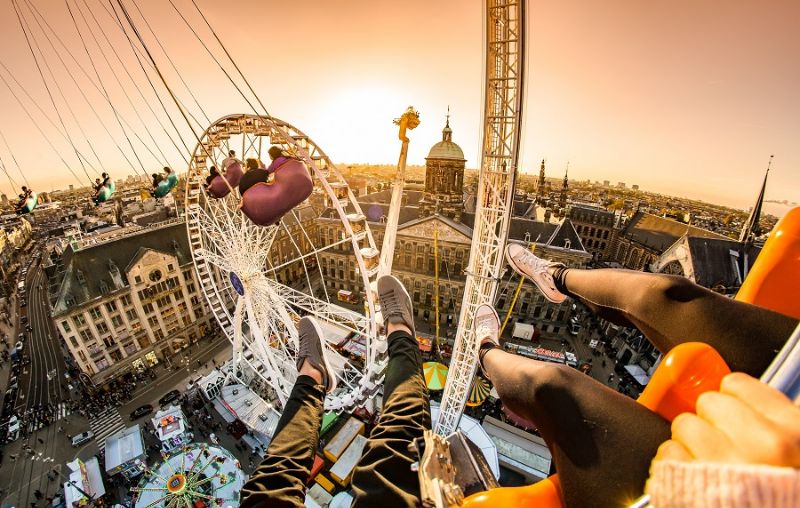 The Moco Museum, or the Modern Contemporary Museum, is an alternative art museum for modern art lovers.

This Museum of the Canals is dedicated to the Amsterdam ring of canals. The ring of canals dates back to the seventeenth century and has influenced the image of the entire city. Here you’ll learn interactively how this area, with its famous canal houses, was created. 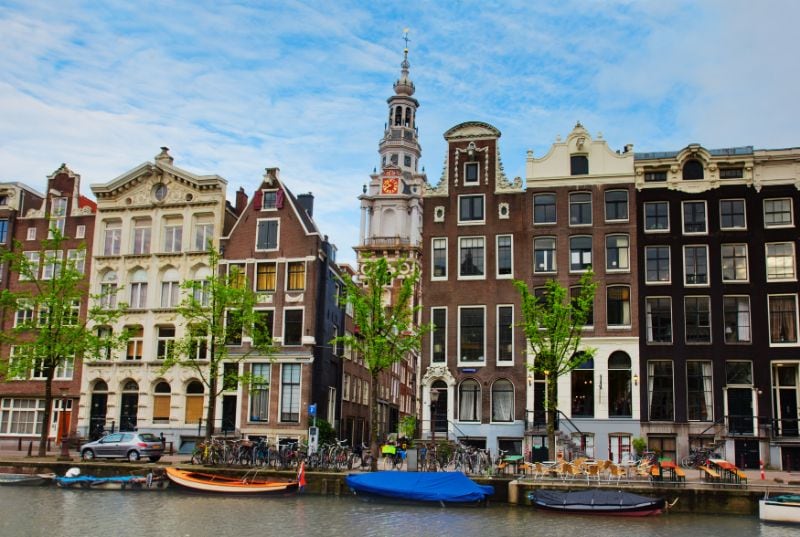 In Amsterdam, you can see the beautiful old canal houses by foot, boat, or bike.

This clandestine church is located in the attic of an Amsterdam house. The church was kept secret, because the Protestant Reformation prohibited Catholics from practicing their faith.

This is literally one of the coolest spots in town! Everything in this bar is made of ice, even the chairs and glasses. 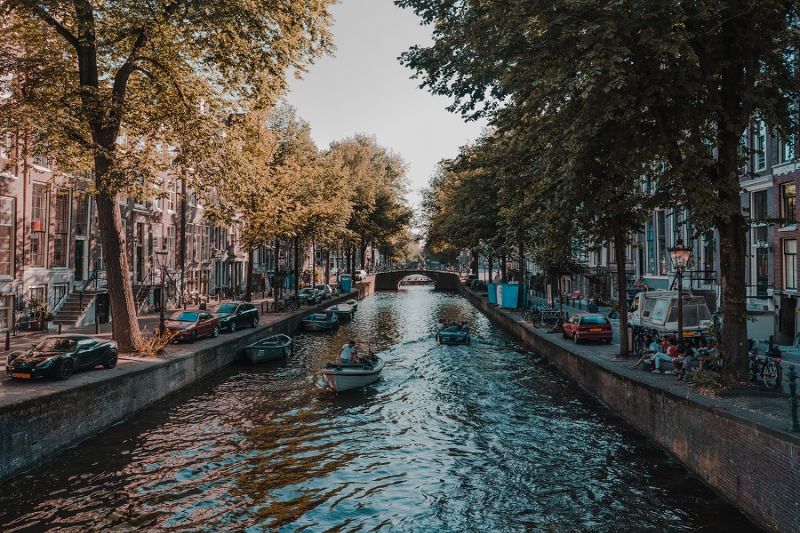 One of Amsterdam’s canals

Museum of Bags and Purses

If you thought bags weren’t special enough for a museum, think again. This museum is home to an enormous collection of handbags and suitcases, all there to teach you about the evolution of the bag.

Museum Vrolik is perhaps the most unusual museum in Amsterdam! This museum boasts a large collection of extraordinary medical items collected by scientists. You’ll find human skeletons and anatomical models. More sinister are the Siamese babies or babies with congenital diseases in formaldehyde.

It’s only about 15 minutes by train from Amsterdam to the old town of Weesp. It’s an ideal escape from the hustle and bustle. There are plenty of beautiful historic locations this old fortified town.

If you want a better picture of what life is like in the Netherlands outside of Amsterdam, it’s worth it to plan a visit to Muiden. You can take a horse-drawn carriage ride through the narrow streets of this medieval village. 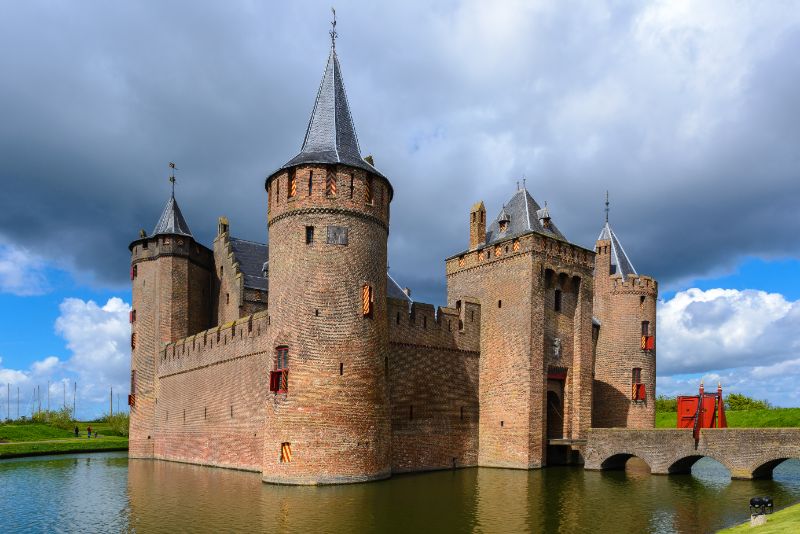 Haarlem is another great day trip from Amsterdam. The picturesque city centre has plenty of museums and restaurants. Haarlem is also an excellent destination for a day out shopping.

Amstelveen is a short ride from the Johan Cruijff ArenA football stadium and Schiphol Airport. Culture is at the heart of Amstelveen, which you can see at attractions like the Amstelveen Puppet Theatre or the Cobra Museum of Modern Art.

Amsterdam is very easy to reach by train or bus. The Dutch capital has direct connections to cities like Rotterdam, Antwerp, Brussels, Lille, and Paris on the high-speed Thalys. You can also easily travel to Amsterdam by train from other Dutch cities. 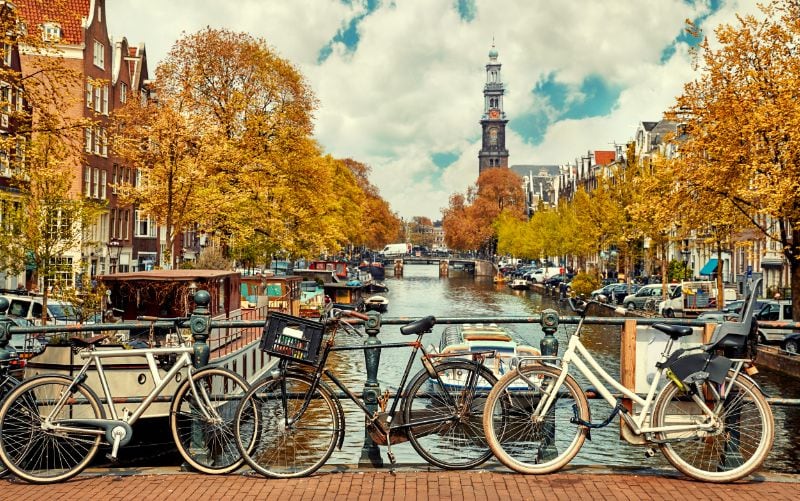 Did you bring your own bike?

If you brought your own bike, you can just cycle from the campsite to the centre of Amsterdam. The city is easily accessible via safe cycle paths. Keep in mind that the centre can be quite busy at times. Do you have a nicer bike or e-bike that you’d rather not leave just anywhere? There are several staffed bicycle parking facilities in Amsterdam. You can park your bike for free for the first 24 hours.

Camping near Amsterdam is ideal. You’ll be in beautiful, green surroundings just past the hustle and bustle of the city, but it’s easy to get into the heart of Amsterdam by bike or public transport. We’ve got five campsite tips for you around Amsterdam.

Campsite Het Amsterdamse Bos is located on the edge of Amsterdam and is easily accessible by metro. Although the city centre is close by, you can camp here in a beautiful corner of countryside. You can camp with your own tent, caravan, or motorhome, but they also have caravans and bungalows available to rent. Bicycles can be rented at the campsite, and it only takes about half an hour to cycle into the city centre.

Campsite De Badhoeve is an excellent choice for water sports enthusiasts. The campsite is located on the Kinselmeer and the Amsterdam IJmeer, so you can combine the hustle and bustle of the city with the peace and quiet of the countryside during your city break. Alternate a day in Amsterdam with a day of canoeing. Canoes, kayaks, and bicycles can be rented at the campsite. From the campsite you can cycle into the centre of Amsterdam in half an hour.

Camping Vliegenbos is located in the wooded area north of Amsterdam. You can reach most of the sights by bike in 15 minutes. In addition to camping with your own camping equipment, you can also stay at their ‘Camping Hotel’ – twenty tents set up around an outdoor kitchen.

Camping Zeeburg has perhaps the best location on the list. This campsite is located on an island in the IJmeer. You can also stay in ‘Eco-cabs’. The city centre is just a 20-minute bike ride away.

Camping and city breaks go hand-in-hand! Read our blogs about the Andalusian city of Seville, the trendy Slovenian capital, Ljubljana, the special southern Italian city, Matera, and camping near Paris.