These 5 driving routes make for great roadtrips through Europe

You will find wonderful driving routes throughout Europe, from Norway to the Alps and from the South of France to Scotland. If you feel like a roadtrip through Europe, we have selected five of the loveliest driving routes for you.

The troll ladder (“Trollstigen”) in Norway

If you have ever browsed through a travel guide to Norway, it’s likely your attention would have been drawn to a spectacular mountain road through the wild Norwegian countryside. This is the Trollstigen (troll ladder), and the ascent is part of Route 63 between Åndalsnes and Geiranger.

The Trollstigen itself is about 20 kilometres long. You climb up on a steep road with eleven hairpin bends though a landscape that gets more rugged, with huge cliffs, waterfalls and snow-covered mountain peaks. There are several viewing points along the way where you can stop to admire the scenery. You can park close to the highest point and walk to the Trollstigheim look-out platform. 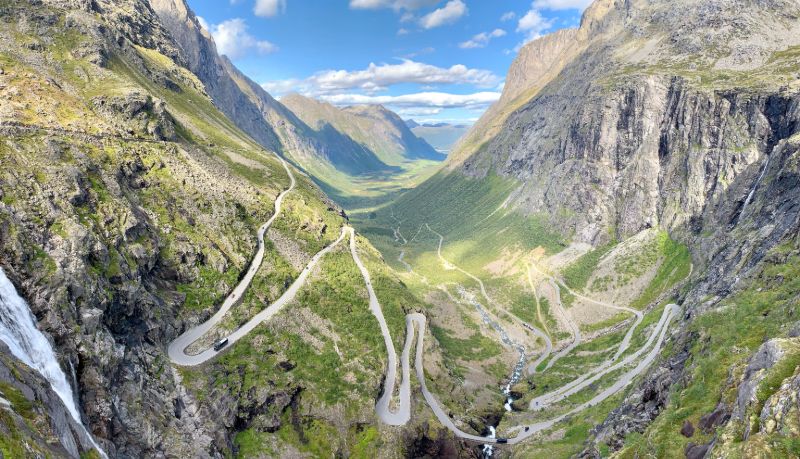 Enjoy the imposing views on the Trollstigen.

Open: the Trollstigen is open from May/June till about November.

Trollstigen driving route with a caravan or motorhome

It is not forbidden to drive the Trollstigen with your caravan or motorhome. It is usually possible in a motorhome, but take into account that not only are there steep gradients of more than 10%, but that you will also meet other vehicles on the hairpin bends, including coaches. So you must be able to swerve and manoeuvre easily. Experience of mountain driving is desirable.

Campsites near the Trollstigen

Special for cycling enthusiasts: the Stelvio Pass in Italy

A light flashes on with racing cyclists when they hear the name Stelvio Pass. This mountain pass (Passo dello Stelvio) has been made famous by the Giro d’Italia race. This is one of the highest paved passes in Europe. If you follow this route from the north, you will start in Trafoi. From here the road begins to rise steeply and you reach a height of no less than 2758 metres via more than 40 hairpin bends.

You descend southwards towards Bormio via another 30 or more hairpin bends. On the way down you will have fantastic views of snow-capped peaks, mountain streams and alpine meadows. There are several viewing points along the way where you can park your car or a (smaller) motorhome. You can park in the pass itself and enjoy the views, or you can visit one of the cafes, restaurants or souvenir shops. 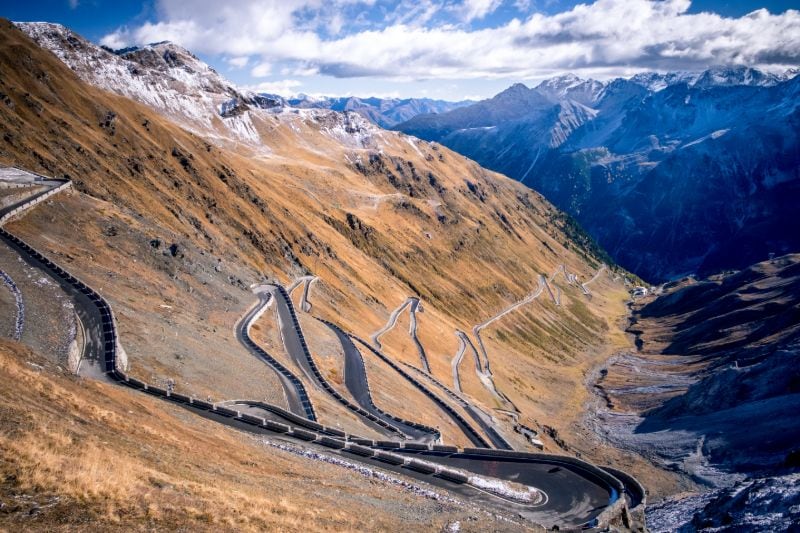 Defy dozens of hairpin bends on the Passo dello Stelvio.

Open: the Stelvio Pass is open from about the end of May to the end of October.

The Stelvio Pass with the caravan or motorhome

The pass is out of bounds to cars towing a caravan. You can enter the Passo del Stelvio in a motorhome. Take other vehicles into account, including cyclists. Experience of mountain driving is desirable.

Campings close to the Stelvio Pass

An adventure in Romania: the Transfagarasan Road

You maybe haven’t heard of this wonderful driving route. Pronouncing it takes a bit of effort: the Transfagarasan Road (Transfăgărășan or DN7C) in Romania. Even so, this road ranks among the list of unusually beautiful routes, thanks to a Top Gear broadcast in 2009.

The Transfagarasan Road was constructed in the 1970s by the former dictator Ceausescu and passes through the Făgăraș Mountains (Făgărașgebergte). Many tourists start this increasingly popular route in the lovely town of Sibiu. The Transfagarasan Road is about 90 kilometres long. You reach a height of more than 2000 metres via a number of hairpin bends, tunnels and viaducts. Maximum speed is 40 km/h.

Highlights of this route are the glacier lake of Bâlea, the Vidraru reservoir and the ruins of Poenari Castle (Cetatea Poenari). As you drive along the Transfagarasan Road, you will be amazed not only by the beautiful mountain scenery, you will sometimes be sharing the road with sheep, dogs, donkeys and cows. You may even be lucky enough to see a bear.

The Bâlea Lake on the Transfagarasan Road

Open: the Transfagarasan Road is closed in winter. Lake Bâlea is then accessible by cable car.

The Transfagarasan Road with a caravan or motorhome

You can drive the route in a motorhome and there are also campers who have been along the Transfagarasan Road with a caravan, but that requires some self-confidence. If in doubt, take advice from somebody who has experience with this road, possibly the ACSI inspector.

One of the highest: the Col de la Bonette in France

The Col de la Bonette is sometimes called the highest road in the Alps, but that’s not actually true. But the col (2715 m) and the extra Cime de la Bonette loop (2802 m) together form one of the highest points you can drive by yourself. The road is located south of Jausiers in the French Alps and is a popular day trip for motorbike riders and sports cyclists.

The surroundings become increasingly rugged from the green mountain landscape, and climb steeply up gravel hills and bare rocks. You can follow the route down from the Col de la Bonette, or opt for the extra loop around the exposed peak of the Cime de la Bonette. You can park here and walk for about ten minutes to the top where you can enjoy the views.

Open: the Col de la Bonette is open from about May to October. 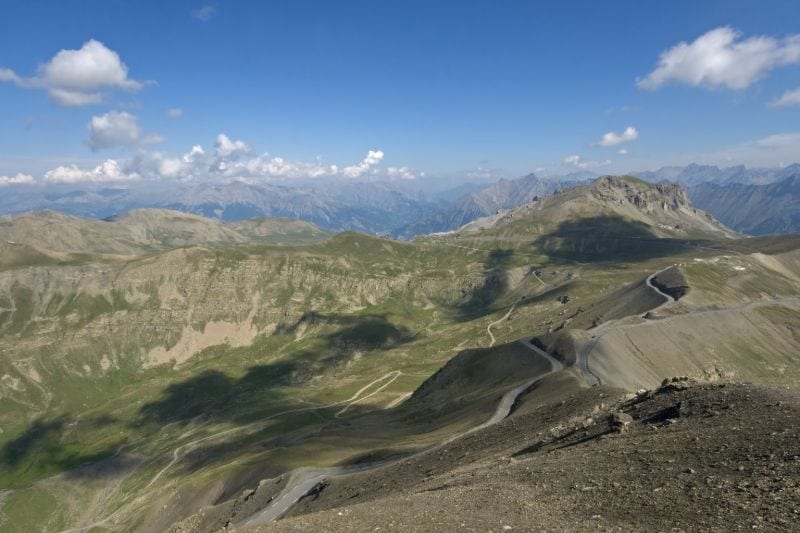 Col de la Bonette with the caravan or motorhome

You can drive on this route in a motorhome, but bear in mind that the road is not very wide and you will probably meet cyclists and motorbike riders coming in the opposite direction. This route is not recommended if you want a relaxing drive with your caravan.

Through the Scottish Highlands: the Road to the Isles in Scotland

We leave the Alps behind us and head for the lower, but equally rugged and beautiful Scotland. Touring around the Highlands is fantastic. One place to visit is Fort William, which is the starting point for the lovely Road to the Isles.. This route is about 70 kilometres long and takes you to the coastal resort of Mallaig. Ferries sail from here to the Isle of Skye, the Isle of Eigg and the Isle of Rum.

Soon after leaving you pass by Neptune’s Staircase, a range of eight locks in the Caledonian Canal. And half an hour later you arrive at the famous Glenfinnian Viaduct which old steam trains still ride across. Many people recognise this viaduct from the Harry Potter films. You can walk under the viaduct and take a look at the tiny station.

You follow the road from Glenfinnan through fairy-tale natural landscapes, lakes and forests. The last part takes you directly to the sea where you can see the islands in the distance. 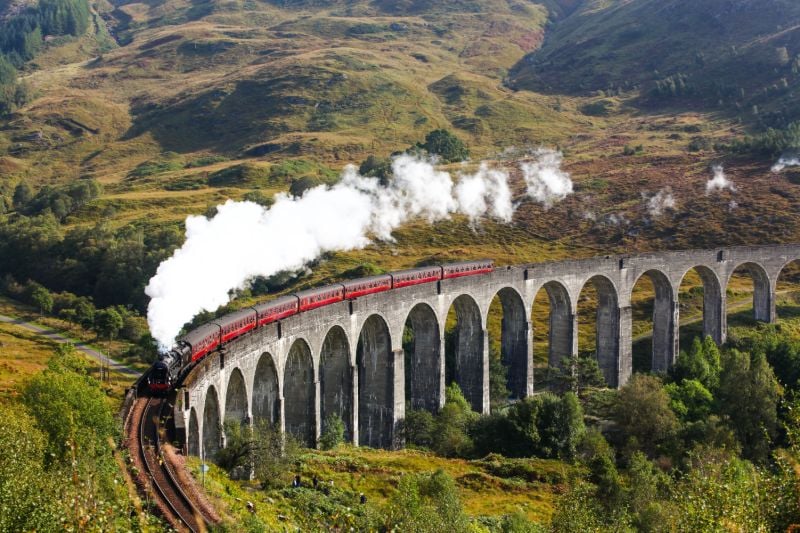 Visit the famous Glenfinnan Viaduct. You might even see a steam train!

Road to the Isles with a caravan or motorhome

This is no problem, and you can drive this motoring route the whole year

Campsites near the Road to the Isles

We’re keen to hear about your experiences

If you have driven along any of these routes, what did you think of them? Are there other iconic routes that should also be on this list? Let us know by leaving a reaction!