This summer, Denmark will be the centre of cycling for three days. On Friday 1 July, the Tour de France starts in the capital of Copenhagen with a time trial. The second stage goes from Roskilde to Nyborg. The third stage of this cycling spectacle on 3 July goes through South Jutland via Haderslev, Aabenraa and Gråsten and finishes in the town of Sønderborg. This is a great reason to put Denmark in the spotlight as a camping destination for camping and cycling enthusiasts.

Imagine if you could think of a new country that would be ideal for campers. There is a big chance it would be similar to Denmark. This green country with its vast coastline is gaining in popularity as a camping destination for a reason. Denmark consists of 444 islands and is slightly larger than the Netherlands. The numerous campsites are generally in the countryside, often by the water and are clean and child-friendly. You can also find great little campsites in Denmark. 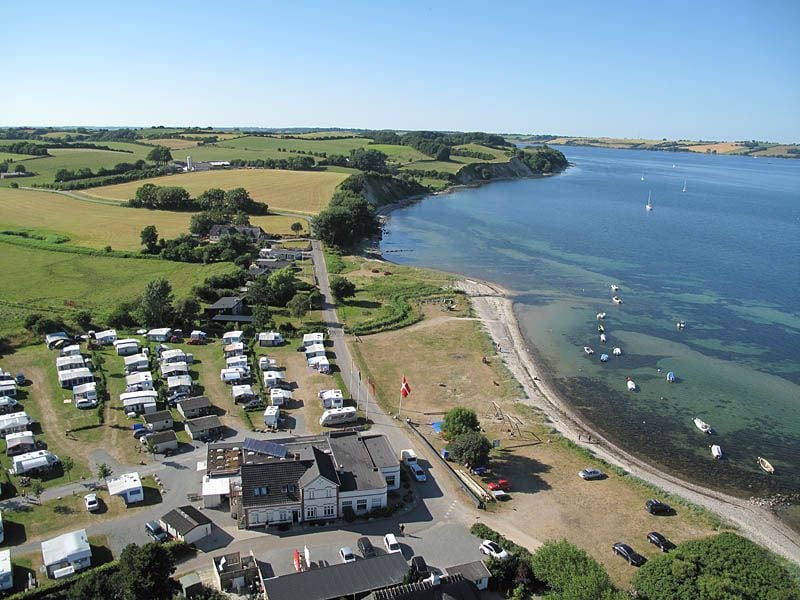 Many campsites in Denmark are in stunning coastal locations (photo: Broager Strand Camping).

Always near the coast

The beaches in Denmark are probably some of the most beautiful in Northern Europe with their white sand, large dunes and a vast coastline of over 7,300 kilometres. During a holiday in Denmark, you will never be more than 50 kilometres from the sea. A large part of the coast consists of sandy beaches where you can have fun flying kites and children can have the time of their lives building sandcastles.

But you will also find plenty of spacious playgrounds in the pebble beaches on the east coast. The many beaches give children the chance to discover nature’s small wonders. Denmark is highly suitable for a summer holiday. It is not as warm as Southern Europe, but you can have plenty of fun in the water!

Campsites in Denmark by the beach

View campsites by the sea in Denmark.

Groceries at the ‘gårdbutik’ (farm shop)

Each season has its own charm in Denmark. In spring, golden rapeseed fills the rolling fields. The summer is perfect for a beach holiday and in the autumn, the heaths turn purple, migratory birds forage and provide a spectacular aerial show at sunset. You can taste the flavours from the land at the many harvest festivals.

Tip: Go to a ‘gårdbutik’ for fresh and local delicacies. That is a farm shop with local and often organically grown products. Also, on the side of the road you will often find un-staffed stalls with fresh vegetables, fruit, honey and jam. 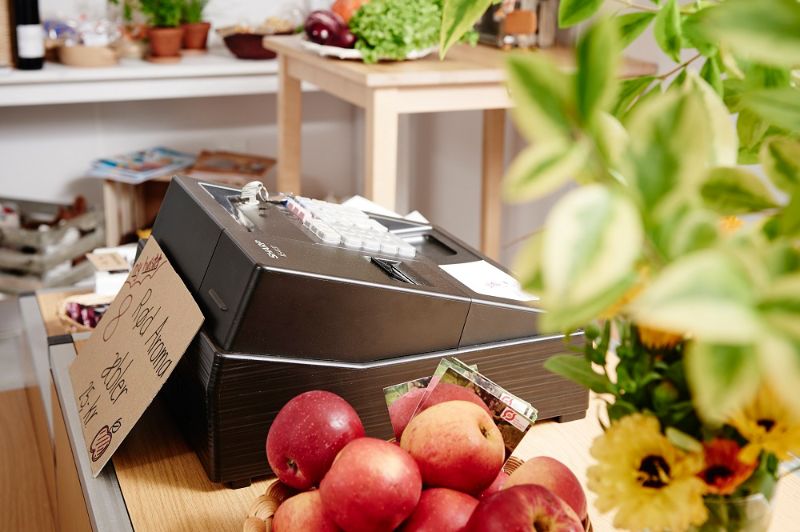 Buy delicious fresh produce at one of the many farm shops or at the campsite!

If a cycling holiday sounds good to you, Denmark is a popular destination for cyclists. The countryside is flat or sloping making the country cycle-friendly. With a network of over 12,000 kilometres of signposted routes, there are plenty to choose from. Most routes take you past picturesque towns and villages and through the green countryside. You can also go on your own adventure and see where it takes you.

The Danish Baltic Sea route covers 820 kilometres and is spread over fourteen stages along the coast of Southeast Jutland, Funen, Ærø, Langeland, LollandFalster, Møn and South Zealand. You can easily explore parts of the route which will enable you to enjoy the stunning views over the hills and water.

Cycling in Denmark offers a nice variety of wide-open countryside and picturesque towns and villages.

To the northernmost point of Denmark

There is also a long-distance cycle route (LF route) in Denmark on the North Sea side, on the west coast of Jutland. This route is part of a European route and takes you from Rudbøl in the south to Skagen, all the way in the northernmost point of Denmark. It’s easiest cycling from the south to the north because the wind usually comes from the southwest.

Campsites in Denmark with a pool

View all campsites in Denmark with a pool.

People who love walking have a vast selection of walking routes with impressive views in Denmark. You will encounter unique natural phenomena from the north to the east coast. For example, take a trip over the Råbjerg Mile, the largest ‘migrating dune’ in Europe. Or dip your toes in two seas at the same time in the town of Grenen where the North Sean and Baltic Sea meet. The chalky white rocks of Møns Klint are also worth visiting.

Furthermore, Denmark has two ‘premium walking routes’ that the European Ramblers Association has certified as Leading Quality Trails. These are the Mols Bjerge Trail in Djursland and the Gendarmen trail in South Jutland. 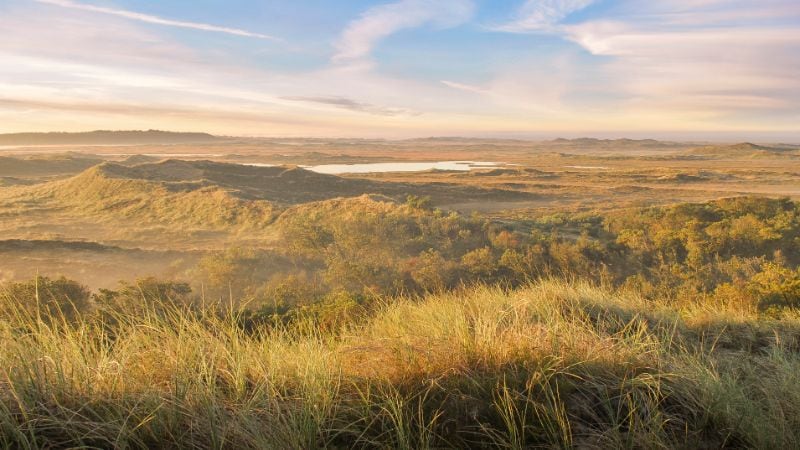 Denmark’s Thy National Park is one of Denmark’s most beautiful areas for walking.

The Wadden Sea National Park in West Jutland, is a national park filled with water that stretches to Germany and the Netherlands. Numerous animals appear at low tide. The area has rightly earned a place on the UNESCO World Heritage List due to its ecological significance.

South Jutland (Sønderjylland in Danish) is the southernmost region of the Danish peninsula of Jutland. It borders North Germany and is a 600-kilometre drive from Utrecht (NL). Characteristic of Sønderjylland and not to be missed during your holiday

You will find ten castles, fortresses and ruins in Sønderjylland. At Sønderborg Castle you will find various exhibitions that will tell you about the region’s history. Gråsten Palace is also worth visiting. The Danish royal family still use the palace; they enjoy at least three weeks of holiday there every summer. The gardens and church are open to visitors the rest of the year. There is a new royal kitchen garden that opened in 2020. You can see many flowers and herbs and sample and buy products there. 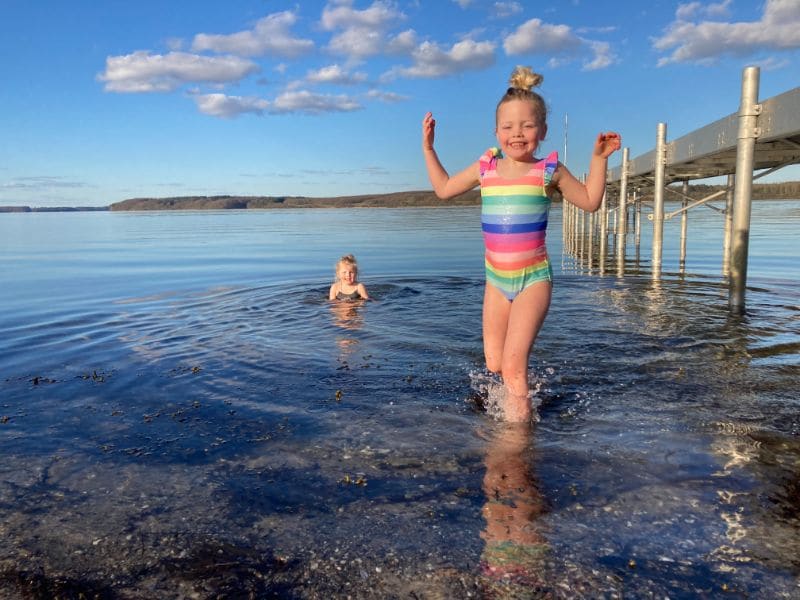 South Jutland was German territory from 1864 to 1920. People were forbidden to speak Danish and community centres could not get alcohol permits, and neither did they have space to offer food. Sønderjyllanders started to take along their own pastries, cakes and biscuits to enjoy with their coffee. The tables in the community centres were soon filled with all kinds of sweet treats. And thus, the tradition of an abundant coffee table was born, a ‘Sønderjysk kaffebord’.

This lovely tradition is still honoured to this day. A Sønderjysk kaffebord consists of at least seven types of hard and seven types of soft cake. Yet, most coffee tables consist of over twenty types of cakes and biscuits. You will still find these sweet ‘Danish tapas’ on the menus. You can also buy tickets for a kaffebord at Gram Castle.

For the island hoppers among us, Aarø is not to be missed. The island in the Little Belt is only 4 by 5 kilometres in size and has about 150 inhabitants. And yet, Aarø is filled with exceptional spots and activities. For example, you will find a vineyard where you can taste wine, eat a snack and immerse yourself in the relaxed island life of Aarø, where everything goes at a slower pace. If you prefer beer, go on a beer safari, where you will visit places that bear the names of speciality beers. The island is easy to reach by boat. Get on the ferry at the harbour at Årøsund, and you will be on Aarø within eight minutes. 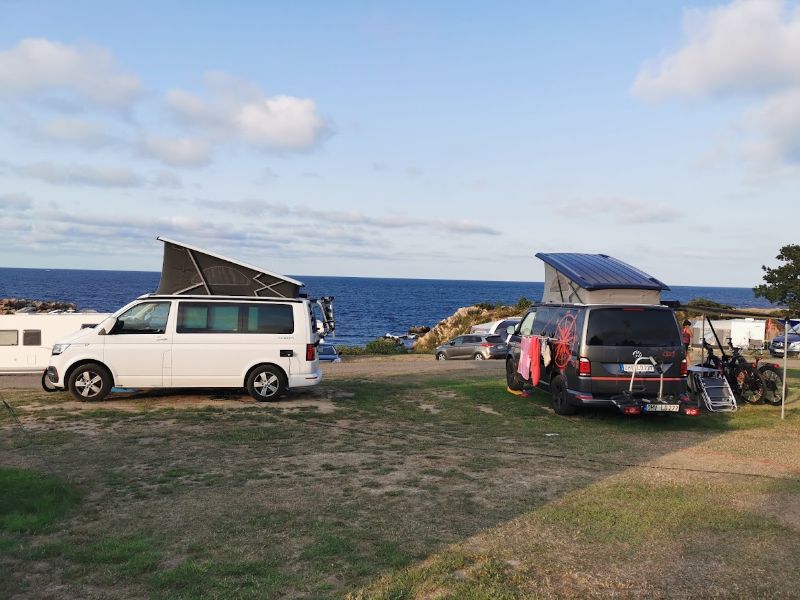 As soon as there is even the slightest bit of wind, the beach will be teeming with people blokarting and sand yachting. The wide beach at Rømø is perfect for these wind-driven vehicles. Book a blokart or a sand yacht and let the wind determine your route. 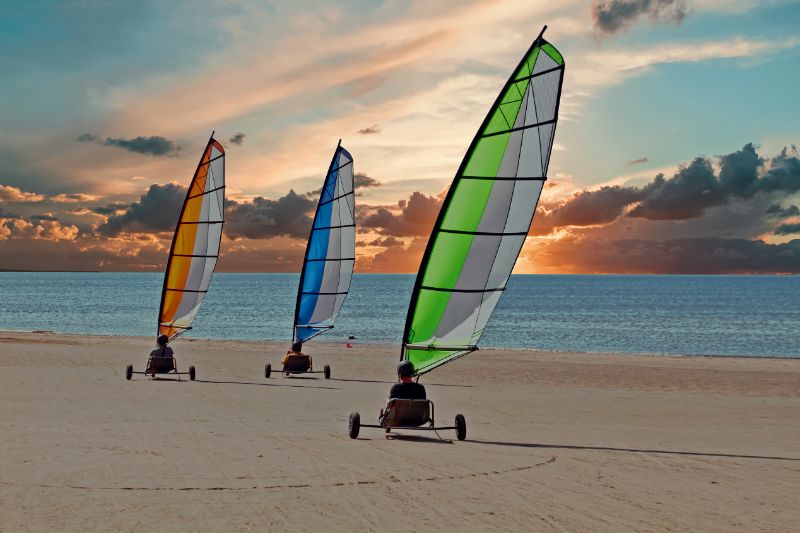 Some beaches in Denmark are perfect for blokarting.

In Dybbøl Banke, you step 157 years back in time. You land is a soldier camp from 1864, where you can experience for yourself what it is like to wage war. In the heavy uniforms of the day, you can hoist yourself up, cast bullets, try a bed from the time, make pancakes using a recipe from 1864 and see weapon and cannon demonstrations. The interactive open-air museum near Sønderborg is a fun and educational outing for both adults as well as children.

If you are interested in war history, then Frøslev Camp is a must see. It is one of Europe’s best-preserved prisoner of war camps from the Second World War. Several buildings have been set up as museums, of which the main building and watchtowers are part of Denmark’s national museum. There is also an exhibition about the Bernadotte action with the white buses. This was a rescue mission to free Scandinavian prisoners from the German concentration camps in 1945.

Have you got any more tips for Denmark?

Have you been on holiday to Denmark before and have tips you would like to share? Let us know in a response!