Home » Accommodations » The rise of the electric car: an expert explains »

The rise of the electric car: an expert explains

Due to the increase in the number of electric cars in Europe and the anticipated increase in the future, demand for charging facilities is also going up. How can you prepare for this as a campsite owner? ACSI asked Michel Bayings, consultant and expert in Europe in the field of infrastructure for e-mobility.

An electric car is no longer a rarity on European roads. A few countries were already ahead, but the European Parliament has now sent out a clear message that we must invest in sustainability. Bayings: ‘Sustainable mobility is an important part of this. The European Commission’s recently published climate objectives, entitled “Fit for 55”, seek to reduce greenhouse gases, such as CO2, by 55% by 2030 when compared to the situation in 1990. Mobility must be an important contributor to this. In practice, this will mean that from 2035 onwards, only cars and vans that are fully zeroemission will be sold. To emit no emissions, they will need to run on electricity or hydrogen.’

An increasing number of electric cars

Bayings expects at least 55% of cars on European roads to be powered by electricity by 2030. In practice, this amounts to between forty and fifty million electric cars. Although hydrogen-powered cars are also included in the objectives, the camping sector will primarily have to deal with the impact of fully electric cars. Bayings explains: ‘Firstly, because experts and manufacturers expect the vast majority of cars to be fully electric. Secondly, because refuelling with hydrogen requires facilities that are not immediately appropriate for a campsite. It currently costs between one and one and a half million Euros to establish a hydrogen station. In addition, the stations are large and the hydrogen needs to be stored in high-pressure tanks and in a safe environment on account of fire safety.’ 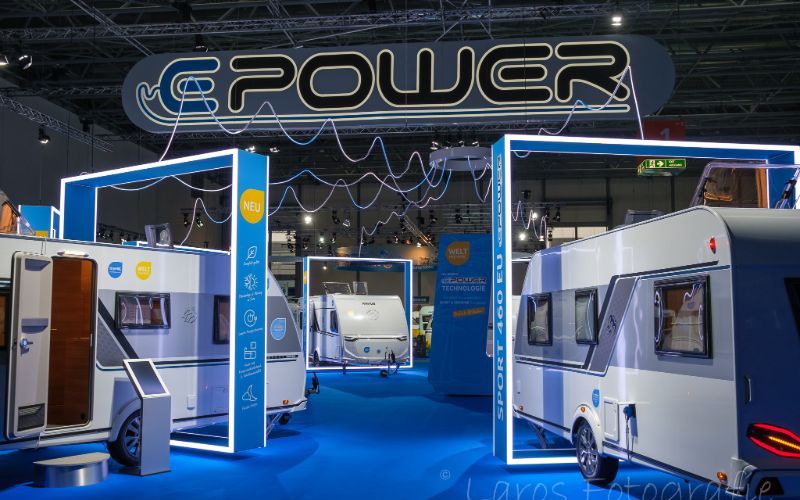 Fully electric motorhomes and caravans on the Caravan Salon in the German city of Düsseldorf.

So, we can expect a large number of electric cars and vans, all of which will need charging facilities. Bayings: ‘This will be solved in part by the installation of fast charging points along motorways. European rules require them to be installed every 60 kilometres along major motorways. And drivers of electric cars will also want to be able to charge their cars at campsites. This need is something that we can already see – look at the number of cables, often with an extension cable attached, that are regularly routed from mobile homes to cars. As a campsite owner, you need to prepare for this and provide safe, well-designed connections.’ It’s also good marketing, explains Bayings. ‘The number of electric cars is currently growing faster than the number of public charging points. It is becoming increasingly common for campers to choose another campsite if there are no charging facilities available.’

According to Bayings, investing in charging facilities is not as complicated as people might think. ‘If you do it right, the investment can remain limited and in the long term, will be fully repaid, especially if you combine it with power generation and storage.’ Bayings focuses in on the technical details: ‘A car can be charged via AC (slow charging) or DC (fast charging). The latter is not really a logical option when you consider the cost of the power network that you need, and the chargers themselves. AC charging is the option to go for. There are two logical places for charging on a campsite – in the general parking area and at individual pitches, if vehicles are allowed there. The charging capacity is determined by the combination of the maximum of what the charging station can provide and of what the car can handle. In practice, most electric cars can charge at 11 kilowatts (kW) AC. That amounts to about 55 kilometres per hour of additional range. With a standard 3.7 kW connection, this is about 12 kilometres per hour.’ 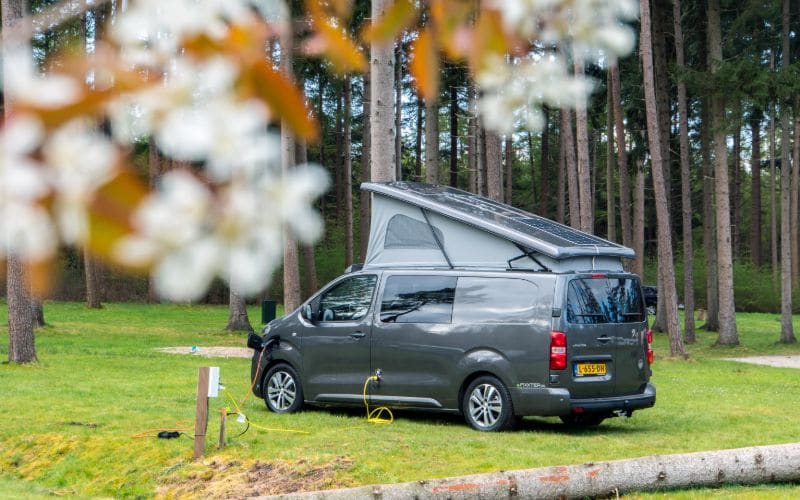 The e-Fixxter is a Dutch made electric camper van with a range of roughly 150 miles (250 kilometers) (c) Timo de Boer.

Bayings explains what the earnings model could look like: ‘Most CPOs also allow you to set the rate for the electricity. Part of that money will be for the CPO, but most of it will be for the campsite owner. The rate can be a rate per kilowatt hour (kWh) – an amount between twenty and thirty-five cents per kWh is commonplace. But, you can also choose a rate per time unit or a combination of both. So long as you clearly communicate your rate to guests, it won’t be a problem. Doing this will allow you to recoup your investment costs in the long run. Charging stations currently have an amortisation period of up to seven years, but they can last for more than ten years. The CPOs also have agreements with many suppliers of charging cards throughout Europe, what are known as Mobility Service Providers or MSPs. A user can then charge his vehicle using his own charging card. The costs are paid to the campsite owner via the charging card provider and the CPO.’ 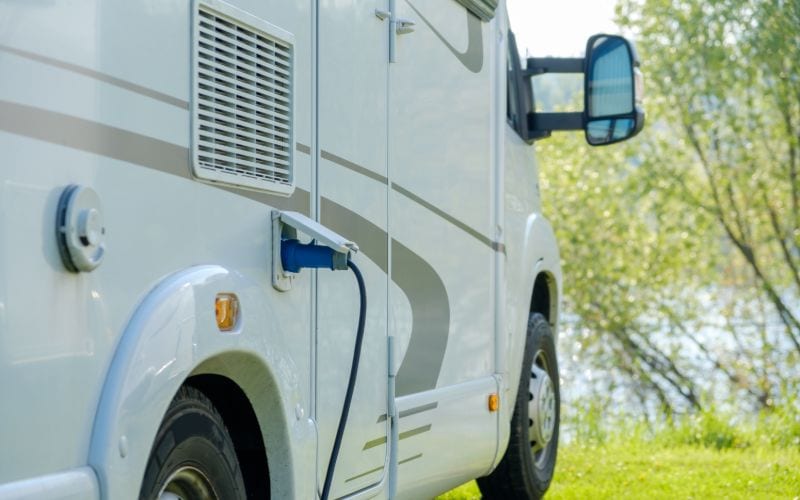 Charging your motorhome will become more and more normal.

Some CPOs offer to bear the full cost of the charging stations and operation or offer a leasetype structure. In that case, the campsite owner only has to install the power supply. Since a charging station costs between €1,000 and €3,000, this can make a significant difference to the amount of the investment. Bayings: ‘By combining charging stations with energy generation through solar panels or wind and by making use of energy storage in batteries, you can optimally coordinate the supply and demand of energy at the campsite. This type of energy management system can also be used to draw energy from the grid and store it in the batteries when it is inexpensive or when there is a ample sun. This energy can then be used to charge vehicles during more expensive hours or in the evenings. Most countries also have subsidy schemes for both solar panels and energy storage.’

Charging stations at the pitch

According to Bayings, charging options at individual pitches will depend on the situation. ‘If the general parking area has enough charging stations, a standard connection of 3.7 kW may be sufficient. For faster charging, campers can use the large parking area. The advantage of this is the lower investment. It is recommend that you install a separate power group for this. Settlement can easily be carried out via the charging station or the power consumed can be recorded and billed centrally. In a situation where the large parking area has no or limited charging facilities, an 11 kW charging station at each pitch is probably the best solution. The charging stations at individual pitches can also be combined with power generation from solar panels and energy storage in small batteries. You can also bundle different pitches together that will in turn provide power to the charging stations in a smart manner.’

Campsites with recharging point for electric cars in France

Campsites with recharging point for electric cars in Germany

Campsites with recharging point for electric cars in Croatia

Show all campsites with charging poles for electric cars or motorhomes. 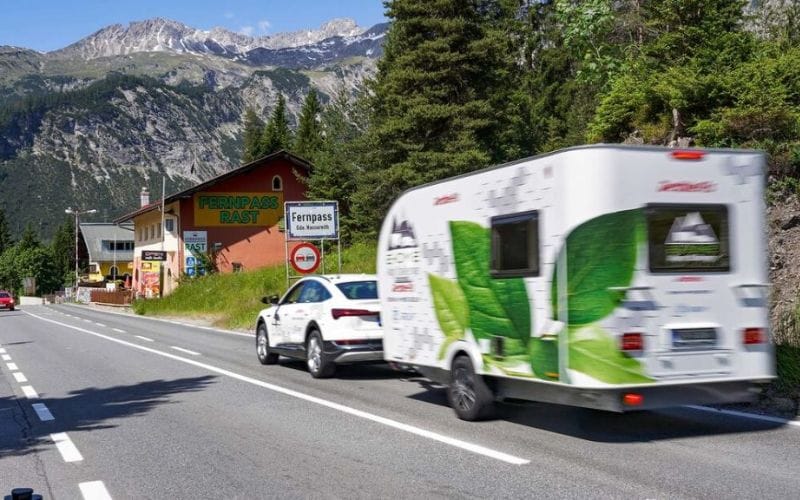 Driving through the mountains with an electric caravan: is this what the future of camping looks like?

Prepared for the future

According to Bayings, we cannot ignore the fact that the demand for charging facilities is only likely to increase in the future, particularly now that more and more electric vehicles can tow trailers (or caravans) and the range and load capacity have improved significantly. ‘As a campsite owner, you can take advantage of this by clearly indicating on your website which charging options are available. And not only on your own campsite, but also the charging options in the surrounding area. Where is the nearest fast charger? And in which surrounding villages and towns can you find a charging station? They are often found at supermarkets. This will certainly have a positive effect on the visit. There are many options, so a campsite owner would do well to map out the situation and look at the options available for subsidies. This will give you an idea of the investment needed. That way, you can make a proper assessment and be prepared for the future,’ concludes Bayings.

Fortunately, camping was already the most sustainable form of holiday. But there is certainly still progress to be made, and sustainable camping and campsite management is attracting increasing attention from holidaymakers and campsite owners alike. Large or small, most campsites are working on water saving, solar panels and other ways of environmentally friendly management. Read more about these environmentally friendly campsites and search for them yourself on Eurocampings, as well as for charging poles on the campsite.

This article previously appeared in the ACSI Times.