Before I go on holiday, I always check to see if there’s a cable car nearby. A ride in a gondola is one of the most wonderful moments on the entire holiday. Sitting back and enjoying the view on the way up is often literally and figuratively the high point of my holiday. In this blog, I’ve put together a list of my 5 favourite European cable cars to share with you!

The term cable car can actually mean several different things. The most well known are the gondola and the chair lift, which hang under a cable. But there are also cable railways, also known as funiculars, which don’t hang from a cable. Instead they ride along railroad tracks. The UK has many funiculars and cable car rides, but that doesn’t mean they can’t be enjoyed in mainland Europe, too. They might be called a ‘téléphérique/’funiculaire’ (French), or ‘Standseilbahn’ (German), but they are always a treat!

This is my personal favourite. Koblenz is a lovely city in the west of Germany. A ride in this cable car, which was built in 2010, starts at Deutsches Eck, the confluence point where the Moselle River flows into the Rhine. It’s quite a modern cable car, boasting 18 gondolas, each with room for 35 people. One trip covers almost 900 metres, and the altitude gain is 112 meters. Your final destination? The Ehrenbreitstein fortress, a historic castle. You’ll enjoy views across the city and the two rivers along the way. Once you’ve reached the top, you can take a stroll through the castle and the surrounding park. 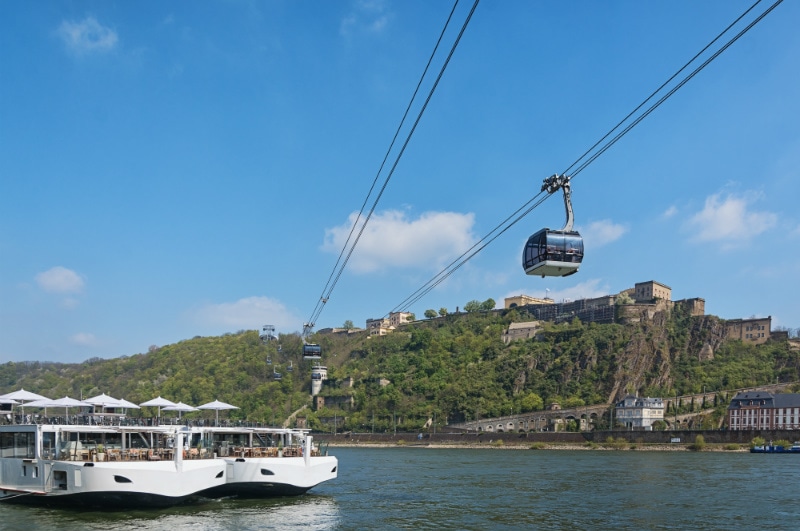 A cable car ride over the water is an amazing treat, especially on a sunny day!

This was yet another fun ride. This Hungarian cable train runs from the banks of the Danube in Budapest to Buda castle, the old royal palace, and operates 70 metres above the Danube. The train has a classic look and was originally opened in 1870. The original track was destroyed during the Second World War, but it reopened in 1986. There are two trains, each with room for 24 passengers. If you want to enjoy the view, your best bet is a seat in the lowest car of the train, preferably by the window. Keep your camera handy, because the ride only takes a minute and a half. One of the highlights of the Portuguese city of Braga is Bom Jesus do Monte, a high-altitude pilgrimage site. As part of the religious experience, you can climb the 577 steps to this shrine. A less spiritual, but more comfortable option is catching the cable train, the oldest traditionally working cable train in Europe (1882). The train runs using water instead of electricity. A water ballast conveyor system is structured around two cars, each with a water tank on board. The tank in the lower car is emptied, while the tank in the upper car is filled. The weight difference allows the descending car to pull the ascending train up the slope. This relaxing ride takes three minutes. 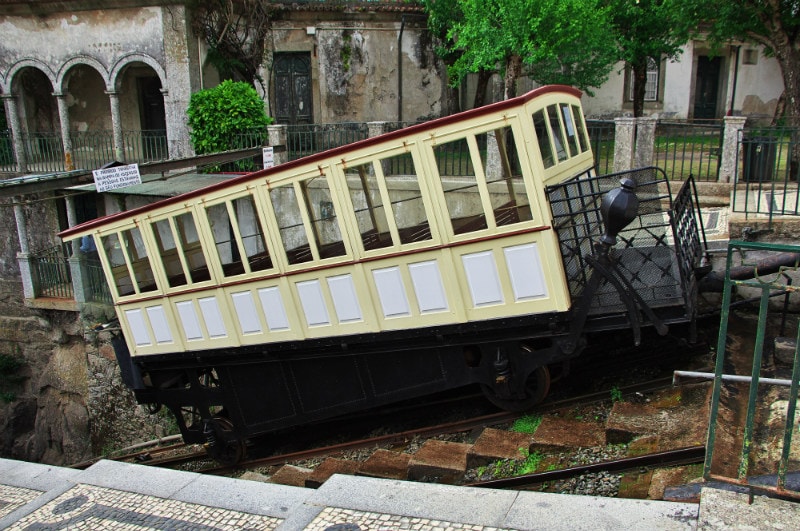 The water ballast conveyor in Braga that takes you to Bom Jesus do Monte.

Hohensalzburg Fortress is an imposing building that towers proudly above the Austrian city of Salzburg. It’s one of the largest medieval castles in Europe. With multiple wings, floors, and towers, as well as an on-site museum, there’s plenty here to explore. You can reach the Hohensalzburg Fortress in one of two ways: on foot or by cable train. This rack-and-pinion railway will take you to the top in less than a minute. It dates from 1892, but was renovated in 1991. It’s a pretty steep ride – the track is 198 meters long and you’ll climb 98 metres in that single minute. At the highest point, you’ll be 536 meters above sea level. 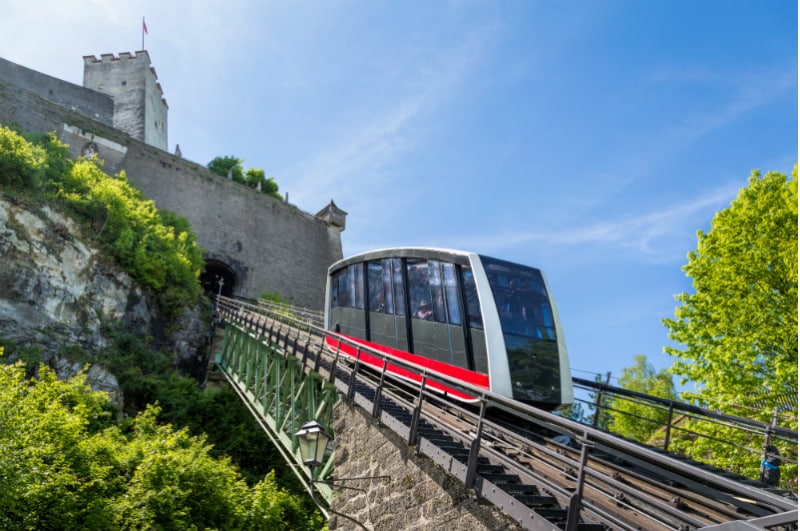 In the metropolis of Barcelona, there are plenty of choices. For example, there is a cable car to Montjuïc Castle that serves two stops, at Parc de Montjuïc or Miramar. From Parc de Montjuïc to the castle, you’ll climb 84.5 metres over a distance of 750 metres. Of course you can take the same route back down once you’ve finished your visit to the castle, but perhaps a better idea is to hop on anothe  cable car straight to the harbour! The ticket office is located on the Plaça de l’Armada, and the Teleférico del Puerto (opened in 1929) covers a distance of 1,300 metres. You’ll disembark at San Sebastián tower, where you can take a lift down. 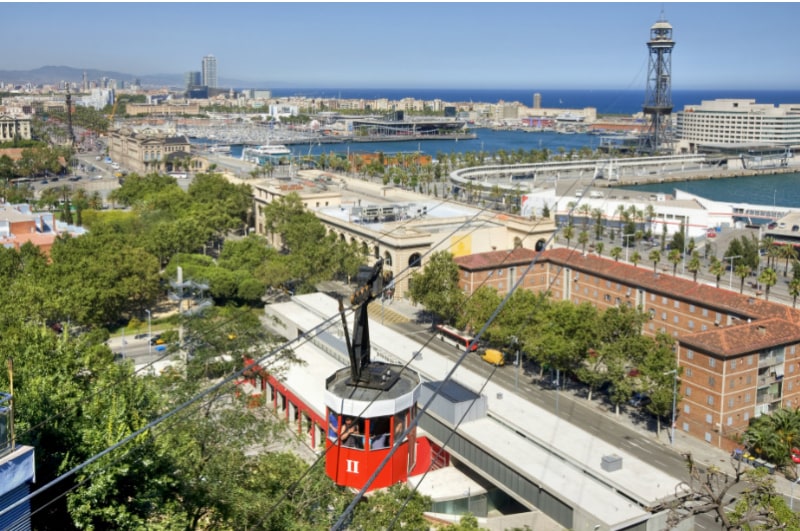 From one high point to another in Barcelona.

Want to stay up to date?

Read all about fantastic day trips, the best camping destinations, and the latest camping news. Subscribe to our newsletter today and you’ll get a plethora of camping inspiration sent straight to your inbox.